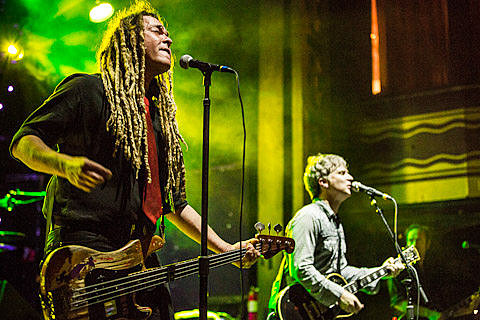 Last week we posted "9 of the best '90s bands you didn't think were the best '90s bands and the awesome stuff they're doing now," and encouraged you guys to leave comments of who you think we should have included and who we should have left off. There are so many more than 9 bands who could've fit on that list, and we loved everyone's suggestions. A few of them were bands we strongly considered but left off the list for one reason or another. That includes Failure (whose reunion we covered a bunch), Local H (who we also cover a lot), Spacehog, and the band who was suggested the most: Nada Surf. Nada Surf is actually the band that most likely would have been our tenth pick, had we included ten picks, but we decided to leave them off. Here's why.

Nada Surf come very close to fitting the bill. They had a fluke hit ("Popular") off their major label debut, High/Low (1996), an album otherwise filled with overlooked gems like the Thurston Moore-esque "Sleep" and the Pavement-esque "Treehouse." Failure to produce another hit caused their label, Elektra, to drop them. The unsigned band then released 1998's The Proiximity Effect on their own label and eventually hooked up with indie label Barsuk Records (then home to Death Cab for Cutie, Kind of Like Spitting, etc) for 2002's Let Go. Since then, they've released three more albums with Barsuk, as recently as 2012's The Stars Are Indifferent To Astronomy. They continue to tour consistently and singer Matthew Caws does cool things like form the band Minor Alps with fellow '90s musician Juliana Hatfield, show up at cool shows like Rock*A*Teens, play benefits with popular indie comedians like Eugene Mirman and Todd Barry and join Guided by Voices on stage. Nada Suf drummer Ira Elliot is also in the high-concept Beatles cover band Bambi Kino with Doug Gillard (ex-GBV). They're also closely connected with some of the bands that did make our list. Harvey Danger singer Sean Nelson sings on more than one of their records, and they co-headlined a tour with Superdrag during that band's late 2000s reunion. Not to mention, if "Flagpole Sitta" and "Sucked Out" come on back to back on a playlist, nothing feels more right than "Popular" coming next.

They've got quality material on all of their albums, but the main reason we didn't think they belonged on the list is that Nada Surf's post-major label career as a fruitful indie band didn't feel as much like a story in 2014 as most of the bands we included. Nada Surf have been putting out well-received releases on Barsuk since 2002, and when we think about the great music that Barsuk's put out over the past decade-plus, Nada Surf's albums immediately come to mind. When most Burger Records fans think of Burger Records, I don't think their first thought is The Muffs or the Superdrag-related The Lees of Memory, who both signed to the label this year. It's been totally normal to see Nada Surf booked on an indie-leaning music festival like Bumbershoot (more than once), Waterloo's SXSW parties, and Sasquatch for at least six years. And unlike "Flagpole Sitta" or "Sucked Out," which still loom large over Harvey Danger and Superdrag's respective careers, ask a younger music fan about Nada Surf and there's a good chance they're more likely to tell you about Lucky (2008) than "Popular." A scroll through BrooklynVegan's "Nada Surf" tag shows we've consistently covered them over the years, whereas the bands on the list haven't gotten much coverage. We didn't feel that highlighting Nada Surf to BV readers at this point would fit the theme of "band you didn't think were the best '90s bands," because that just seemed like old news.

The main point of the list was to shine a light on deserving bands whose merits often went overlooked. Nada Surf is equally deserving and if this list was written a few years ago, there's no doubt they'd be included. Now, relive some Nada Surf memories below...

Minor Alps - "I Don't Know What To Do With My Hands"