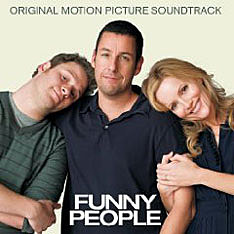 There was a screening of "Funny People" in NYC yesterday. "Funny People is the new Judd Apatow movie that stars Seth Rogan, Adam Sandler, Leslie Mann, and Raaaaaaaandy. As you can see in the track listing above, the soundtrack features a live Wilco song that was recorded when they were playing shows last year with Andrew Bird who joined them on stage. Some video examples of that below.

Wilco came to NYC this week to play a big show at Keyspan Park in Coney Island (7/13). That show also featured many special guests including Leslie Feist who most likely flew in mainly to join Wilco for their appearance on the David Letterman show which aired last night (7/14), but was recorded yesterday afternoon which gave Jeff Tweedy plenty of time to make it over to the movie screening (which he was spotted at). Letterman video below...