UPDATE: pictures from Wilco's show in Coney Island are POSTED. 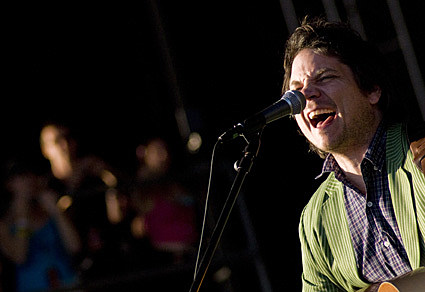 Wilco will play Brooklyn's Keyspan Park tonight (June 13th) with Yo La Tengo. Tickets are sold out (no tickets at the door even), but there are still tickets available to Wilco's July 18th show at Dutchess Stadium in Wappingers Falls, NY (about an hour and a half north of NYC). That show pairs the band with opener Conor Oberst & the Magic Family Band (who played NYC on July 4th with Jenny Lewis). Oberst recently opened other shows for Wilco, including Friday, July 10th in Wilmington, Delaware.

In Friday's opener, "Wilco (the song)," a generous-spirited rocker, the raspy-voiced Tweedy volunteered his accomplished band as "a sonic shoulder to cry on," and promised the intergenerational crowd, "Wilco will love ya, baby."

That affection was expressed in a career-spanning set that reached back as far as 1994's underrated A.M. for the bittersweet "Box Full of Letters." But rather than a shoulder to cry on, Wilco's songs typically offered a chance to bond over shared anxieties.

Tweedy is not always the most articulate lyricist; I'm not quite sure what it means to be "cold as gasoline," as he sings on the new disc's "Solitaire." But his band, whose standout star is avant guitarist Nels Cline, is expert at expressing its leader's discomfort in songs such as "Muzzle of Bees."

Even a song that declares "I'm Always in Love" finds reason to worry. The only carefree tune after the opener was the closer, the deliriously happy "Hoodoo Voodoo," whose lyrics were not written by Tweedy but by Woody Guthrie... [Philadelphia Inquirer]

Videos from that July 10th show and their July 11th show in Lowell, MA, are below.

All those Ballpark gigs are part of Wilco's summer tour in support of the now-out Wilco (The Album). In August, they'll be touring behind the record in Europe.

Tuesday night, July 14th, Wilco will perform "You and I" from Wilco (the album) on The Late Show with David Letterman with special guest vocalist Feist. Feist also recently played guest with Grizzly Bear (who she has also played on TV with), and joined her old band Broken Social Scene on stage in Toronto.

All the above-mentioned videos, and tour dates, below...

Wilco will perform "You and I" from Wilco (the album) on The Late Show with David Letterman on Tuesday, July 14 with special guest vocalist Feist.