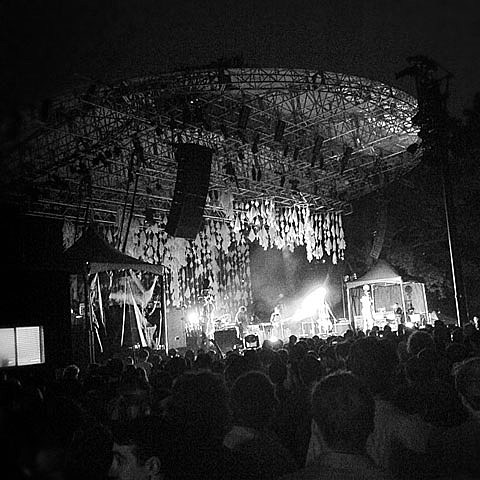 "Loved the show..nice mix of the new album--love it!, plus the usual "singalongs" and plenty of older gems. Was that tweedy's son dancin' on stage? And except for the lines at vending, I really enjoyed the venue tonight.
And no rain!
Back tomorrow for round 2. For those going, Wilco on about 7:50, played a little over 1.5 hours, then back for an extended encore. Total show 2-2.25 hours I'd say. 25 songs!" [A Cherry Ghost]

Wilco played their first of two NYC shows with Nick Lowe in Central Park last night (9/22). They do it again this evening (tickets HERE). Check out the list of 25 songs they played last night with a short video clip from the show, below...

Wilco Concert Setlist at Central Park SummerStage,
New York, NY, USA on September 22, 2011
Art Of Almost
I Might
Ashes of American Flags
I Am Trying to Break Your Heart
One Wing
Bull Black Nova
At Least That's What You Said
One Sunday Morning (Song for Jane Smiley's Boyfriend)
Shouldn't Be Ashamed
Born Alone
She's A Jar
Handshake Drugs
Standing O
Rising Red Lung
Impossible Germany
Dawned On Me
A Shot in the Arm
Hummingbird