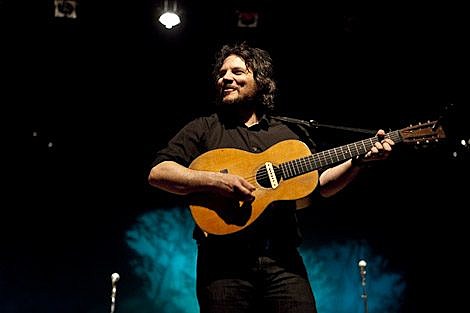 "Wilco frontman Jeff Tweedy gave fans a scare Saturday night at the recently refurbished Fox Theater in Pomona when he declared, 12 songs into the band's set, that the Chicago-based act was "approaching the end of an era," and promised more details later.

Those aren't words to be taken lightly for Wilco followers. Depending on who's doing the counting, the group has had as many as six different eras since releasing its country-obsessed 1995 debut, "A.M." Yet its audience has remained loyal through a host of lineup changes, Tweedy and bassist John Stirratt being the only constants in Wilco's career.

While the comment raised concerns about a future without, say, the participation of local guitar slinger Nels Cline or rhythmic contortionist Glenn Kotche, the truth turned out to be nothing so worrisome. After 45 minutes, Tweedy revealed only that multi-instrumentalist Pat Sansone was turning 40." [LA Times]

The 25-song setlist from Saturday night's show is below.

"Due to production changes, field tickets have just been released" for Wilco's upcoming show at Keyspan Park in Brooklyn. Yo La Tengo is opening.

Nels Cline has three non-Wilco NYC shows coming up. One of those shows is the previously-mentioned M. Ward Central Park Summerstage gig where Nels will play in a band with Mike Watt, Yuka Honda, Dougie Bowne. That foursome is called Floored by Four, and according to Mr Watt, they "plan to record a album the two days before the gig." Add it to the list. All Nels dates below...