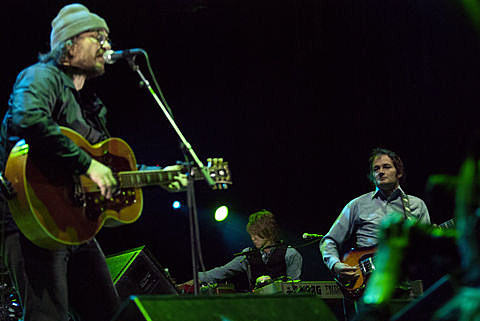 The Autumn Defense (John Stirratt and Pat Sansone of Wilco) have announced a NYC show before they play WIlco's Solid Sound Festival later this month. The band will play The Living Room on June 18 at 9 PM, before Joseph Arthur, who Sansone collaborated with in Holding the Void, plays one of his ten shows at the same venue.

John Stirratt and Jeff Tweedy's ex-Uncle Tupelo bandmate Jay Farrar also has a few shows coming up. Those include October 14 and 15 at City Winery in NYC. Tickets are on sale.

Nels Cline of Wilco plays Le Poisson Rouge with Marc RIbot tonight (6/15). Tickets are still available. Nels also plays Blue Note on Friday (6/17) as part of the Spontaneous Construction series. The show is part of the Blue Note Jazz Festival. Tickets are on sale. He will also play with The Les Paul Trio at The Iridium on July 11 as part of their Les Paul Guitar Tribute Mondays. Nels plays Solid Sound with Thurston Moore under their Pillow Wand moniker.

Jeff Tweedy has no NYC dates but you can catch him at Winnipeg Folk Festival with Mountain Man, Dawes, Lucinda Williams and others on July 6-10.

All tour dates, Wilco included, below...