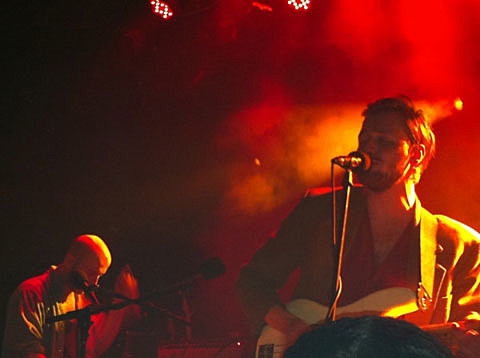 Wild Beasts played two shows at Le Poisson Rouge this week with Marques Toliver as part of a short East Coast run that also included a stop at radio station WNYC where they performed on Soundcheck. Check out a video of "Loop The Loop" from their radio performance below.

At the second LPR show, last night (7/14), they played a 13-song set (encore included) mainly consisting of material off the recently released Smother. The rest of the set was filled with 4 Two Dancers tracks and Limbo, Panto favorite "The Devil's Crayon." The 3-song encore ended with the appropriately titled "End Come Too Soon."

The full LPR setlist, WNYC video, some videos from their 7/12 Philly show and more, below...

Wild Beasts on Later - All The King's Men on Jools Holland

Wild Beats @ LPR Setlist - 7/14/2011: (thanks Andrew Leigh!)
Plaything
Loop the Loop
Deeper
The Devil's Crayon
We Still Got the Taste Dancin' on our Tongues
Albatross
This Is Our Lot
Bed of Nails
Reach a Bit Further
Hooting and Howling