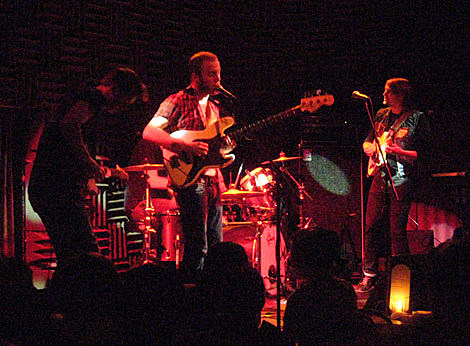 Even without All Tomorrow's Parties, this week is bananas with quality shows, so much so I'm dividing this week's column into two parts. (Which means more tomorrow.) I caught Wild Beasts' New York debut last night (9/8) at Joe's Pub and they were fantastic, wowing pretty much everyone in the room. I wrote over at Sound Bites...

Wild Beasts' magic is in the interplay between the four members, and it's best just to think of them as one slithering unit. Vocals trade lines between Flemming and Thorpe like twins, and the guitar lines snake around one another, bass pulses and ebbs, while drummer Chris Talbot (the band's secret weapon) gives most songs a tribal feel -- lots of toms, not so much cymbals. Nobody stood still for a second, bassists-guitarists-singers Hayden Thorpe and Tom Flemming swinging and swaying, hooting and howling. A bit more "rock" than the versions on new album Two Dancers (Talbot plays a little more four-on-the-floor live) but if it's subtleties are missing, it's made up in a mesmerizing group performance.

Wild Beasts have two more shows this week and you should really, really go see them. They play Thursday (9/10) at Mercury Lounge (tickets still available) and then Friday at Union Pool (no advance tickets). Video from Joe's below. 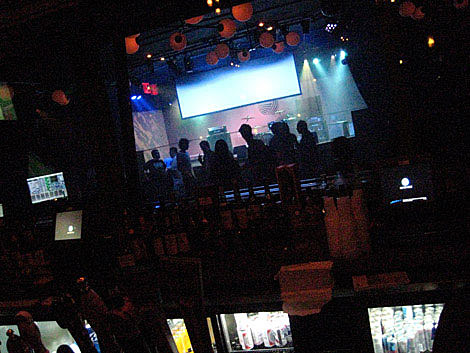 After Wild Beasts, I bolted back to Williamsburg for the "soft opening" of the new Knitting Factory space which will get baptized officially tonight (9/9) by Tim Harrington and the rest of Les Savvy Fav. No bands last night, just drinks and a looksee around the place. It's nice. The Knitting Factory folks have completely transformed the Luna Lounge space which suffered from being one giant space with nowhere to go if you wanted to escape the noise. They smartly divided the space in half, with a bar room up front and the performance space in back. The front bar room has a number of booths and a nook where a small band could play. The actual bar is set against the wall that divides it from the performance space which is where the double-layer of super-thick soundproof glass windows are, so you can still see the bands play even if you'd rather be talking to friends. They'll pipe in a monitor feed to the bar room so you can still hear the bands, just at a much lower volume. 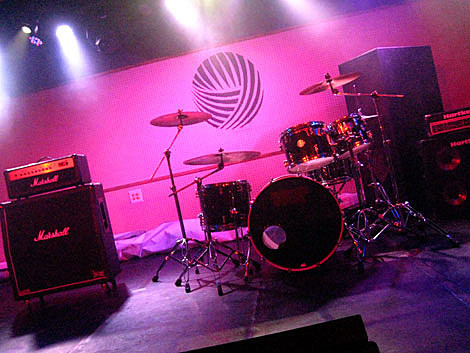 The elongated Knitting Factory performance space looks to be about the same capacity as Mercury Lounge, with what looks to me like a slightly smaller stage than when it was Luna Lounge. There's a bar stage right so you don't have to go to the other room for a drink. The floor slopes down slightly from the sides of the room, like the world's gentlest half-pipe so the shorter among us might want to stay to the sides for a better view. There was no band playing last night, so I can't say how it sounds, but stage lighting looked really nice and they have built-in smoke machines for when Blacklist or Cold Cave play. It's a nice space and I'm anxious to actually see a band play there. Tonight will definitely be a trial by fire with Les Savy Fav, and the place should have a bit of that lived-in feel after they get done. Tomorrow night (9/10) is Boss Hog and Shilpa Ray, and Friday has Seattle's The Spits and Austin's Woven Bones, two bands who might just put those smoke machines to use. More on them tomorrow in TWII Pt2. More upcoming shows mentioned HERE. More pictures inside the new venue at Gothamist. 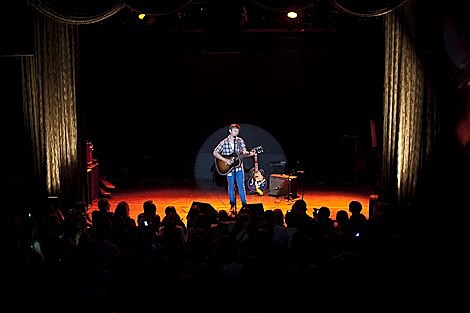 Just a couple other reminders of shows I've mentioned before. Sondre Lerche played Bowery Ballroom last night (9/8), which was a record release party of sorts for his very entertaining sixth album, Heartbeat Radio. He does it again tonight, this time in his neighborhood at Music Hall of Williamsburg. You should be able to get tickets at the door. As I said last week, he's a funny, entertaining performer with lots of between-song stories. 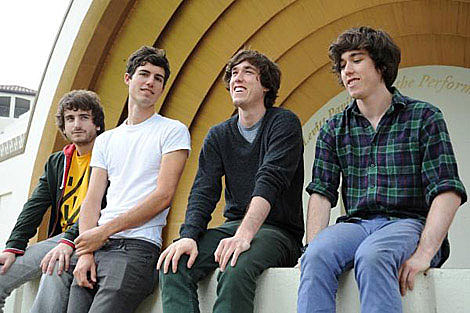 Princeton play Union Hall tonight (9/9) which is kind of a record release party for their full-length debut, Cocoon of Love. It's not actually out till Sept 29 but you can get it via iTunes as of yesterday. It's a really nice bit of harmony-laden chamber pop (you can stream the whole thing at Spinner), with shades of Belle & Sebastian and Magnetic Fields. You can download the album's "Calypso Gold" at the top of this post. They're pretty good live too. After tonight's Union Hall show, Princeton head out on tour with Ra Ra Riot. All tour dates are below. 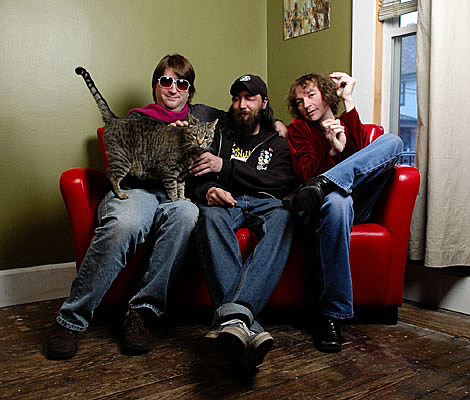 And Indianapolis' Marmoset hit town today for their first of two shows. Tonight (9/9) it's Cake Shop and Thursday is Bruar Falls. If you like your indie rock heavily influenced by the likes of early Creation records, Syd Barrett, and Swell Maps while being filtered through some sort of off-kilter David Lynch sensibility, well you probably already know and like Marmoset. In reviewing their 2007 album Florist Fired, Pitchfork wrote "Marmoset's previous full-length, 2001's 13-song, 33-minute exercise in Anglophilic indie Record in Red, quietly ranks among the best albums released by Secretly Canadian." Marmoset's brand-new album, Tea Tornado, is more of the same. And that's a good thing.

Tour dates and appropriate video after the jump...

Wild Beasts - "All the Kings Men"