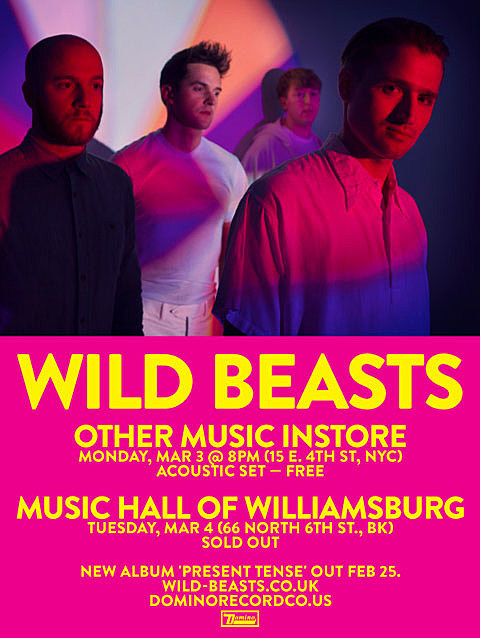 Wild Beasts fourth album, Present Tense, is out today (2/25) via Domino. While decidedly more synth-heavy than anything they've done before, the record is still very much in the band's lusty, decadent universe. The album's second single, "Sweet Spot," is maybe its best song, with the signature interplay between vocalists Hayden Thorpe and Tom Flemming in full effect. You can stream it below. The band also recently made a mix for FACT which opens with them covering Leonard Cohen's "Hey That's No Way to Say Goodbye" and you can stream that below too.

The band will be in the US next week, playing Brooklyn's Music Hall of Williamsburg on March 4. That show is sold out, but if you didn't get tickets we've got two pair to give away. Details are below.

Meanwhile, Wild Beasts will be doing an in-store set at Other Music the day before their MHOW show (Monday, 3/3) at 8 PM. That's free and open to the public. Flyer for their NYC appearances, "Sweet Spot" and FACT mix streams, as well as contest details, below... 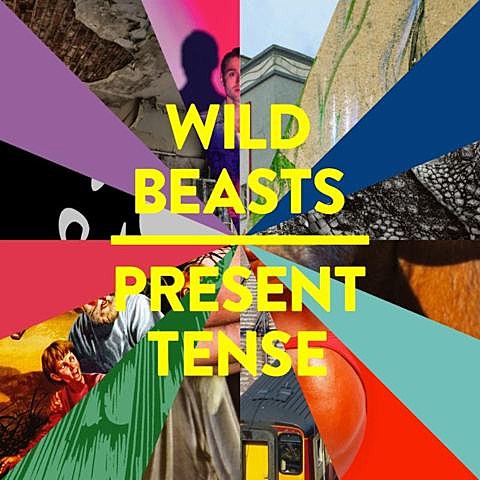 ======================
For a chance at winning a pair of tickets to see WILD BEASTS AT MUSIC HALL OF WILLIAMSBURG: either tweet something that includes both @BrooklynVegan AND "WILD BEASTS" in the tweet, or send an email to BVCONTESTS@HOTMAIL.COM with the subject line "ARTIST". Include your first and last name in the email. We'll pick a winner at random and contact them with more details. If you enter by email, it will not be shared with anyone else. Good luck!
======================