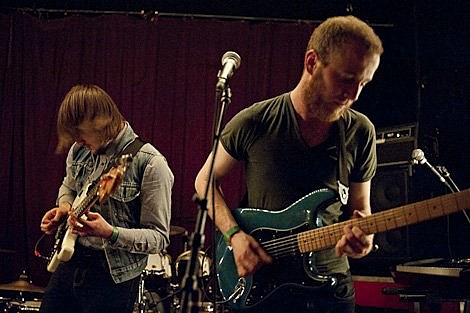 England's Wild Beasts nabbed a nomination for this year's Mercury Prize for their record Two Dancers. The shortlist of nominees is below, and the winner will be announced September 7th.

As previously mentioned, the band plays a series of North American shows starting in Chicago this weekend, where they perform at Lollapalooza. After which, they visit NYC for a gig at Highline Ballroom on August 11th with Lone Wolf and The Kissaway Trail. Tickets are still on sale.

In honor of these special shows and their recent Mercury Prize nomination, Domino is releasing a 10" featuring "We Still Got The Taste Dancin' On Our Tongues" from their acclaimed sophomore album, Two Dancers. The track is b/w a very rare B-side "Through The Iron Gate" (previously only released in Japan), as well as "Two Dancers ii" remixed by label mate Jon Hopkins, and a gorgeous melancholic acoustic version of "The Devil's Crayon."

We're offering these tracks as a complimentary download from August 2-9. You can also grab a physical copy of the 10" at any of Wild Beasts' shows or from the Domino Mart.

Get those songs, along with their video for the "Tongues" single, and all tour dates, below...

Wild Beasts - We Still Got The Taste Dancin' On Our Tongues