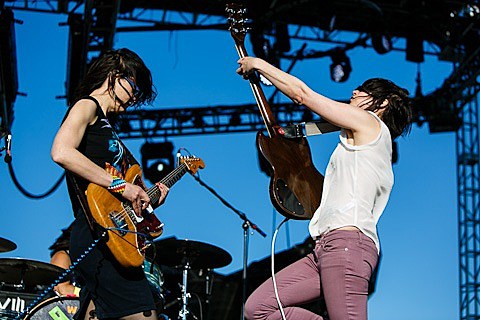 After the breakup of Sleater-Kinney, Corin Tucker went solo, and Carrie Brownstein and Janet Weiss teamed up with Mary Timony (Autoclave, Helium) and Rebecca Cole (The Minders) to form Wild Flag. They gave us an excellent album (one of our favorites of 2011) and toured like crazy, but apparently this great run has proved to be a short one because the band are no more. Janet Weiss tells The Skinny (via Stereogum), "It was great but I think it just kinda ran its course. It's hard to have a band when you live five hours apart by plane." That's a bummer if Wild Flag is done for good, but if so, thanks for the great memories!

On the bright side, Mary has been busy with her new band Ex Hex (who have an album coming out on Merge), and Rebecca's also been playing keyboards in another Merge band, Telekinesis. Janet is forever busy, having released an album with Quasi and Drumgasm this year, and of course Carrie always has Portlandia. Oh yeah, and all three members of Sleater-Kinney reunited on stage with Pearl Jam last week, so here's to hoping that wasn't the last we'll be seeing of Corin, Carrie, and Janet together.