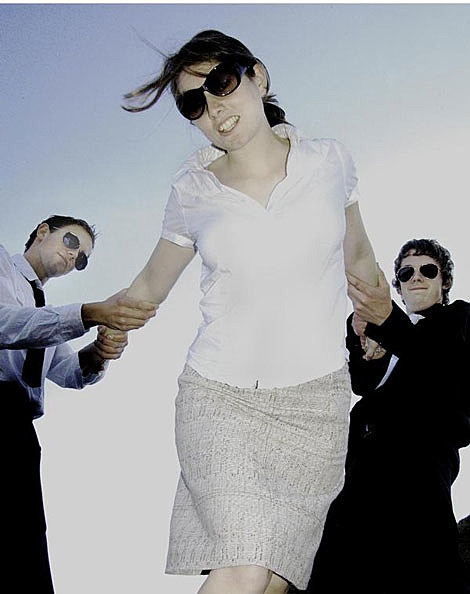 It's March Madness, people. New York is very lucky to get a lot of SXSW runnoff and between now (3/11) and Monday (3/15) you can go see loads of great bands from all over the world -- Norway, England, Bushwick -- and they'll probably play longer sets than they will in Austin. So if you're not going to the fest (and most people aren't despite how empty Williamsburg will be next week), here's your chance to experience some of the fun. And if you are going, you can cross some bands off your list early and start getting used to late nights, loud music and cheap beer. If you're not already used to that.

I already talked about Free Energy. And speaking of Philadelphia, that the name of my favorite song on the new album by Sheffield, England's Standard Fare who play tonight at Cake Shop (3/11). It's got one of the better opening lyrical salvos that I've heard in a while: "Global warming is getting me down / It's making the sea between us wider and deeper / Now, I'm not Moses and I don't know how to split up the ocean and drive right on over." The music -- sprightly indie jangle -- suits it perfectly. The album's called The Noyelle Beat (out 3/16) and I highly recommend it, as well as going to see Standard Fare live.

Tonight's show is headlined by Diehard who if you haven't seen yet you should correct that soon. Unabashed lovers of '90s indie (but I wouldn't call them retro), they know their way around stick-in-your-head hooks. A perfect way to warm up for those Pavement reunion gigs. Also playing are Vancouver's low-fi rockers Makeout Videotape and Brooklynites Sally Head. 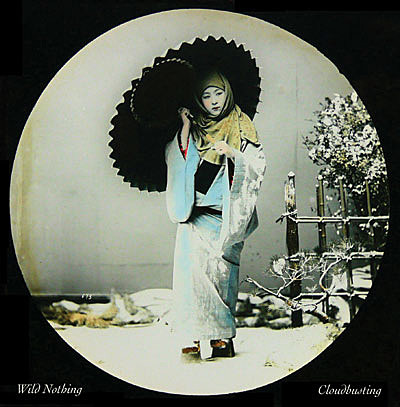 Virgina's Wild Nothing are back in town, playing Market Hotel tonight with Fluffy Lumbers, former Cibo Mato singer Miho Hatori and Blissed Out, and then they open for Woods, Real Estate and Happy Birthday at Music Hall of Williamsburg on Friday (3/12).  I really like their debut album, Gemini, that will be out in May on Captured Tracks. The label just put out Wild Nothing's cover of Kate Bush's "Cloudbusting " as a new 7" that's worth picking up while you wait for the album. If you like early '90s UK shoegaze and twee (Pale Saints, Field Mice are good touchstones) you should definitely check out them out. They haven't quite figured out the live show, but they're getting there and worth showing up early to check out. They'll also play Shea Stadium on Saturday (3/13) and will be back in two weeks to play Glasslands on April 2.

If you're going to the MHoW show on Friday (sold out), do get there early as Happy Birthday are worth seeing too. I caught them a couple weeks ago opening for the Dum Dum Girls and was taken by their mix of Big Star powerpop and Dinosaur Jr. sludge. Their album, due on Sub Pop this Tuesday (3/16), also has some synthy numbers on it too which they eschewed live when I saw them. It's not the most cohesive album, but almost all the songs are good. They'll be at SXSW too.

Woods, meanwhile, just announced that their new album, At Echo Lake, will be out May 11 on Woodsist. Check out the first song released from it, "I Was Gone," at the top of this post. Tracklisting and all tour dates below. 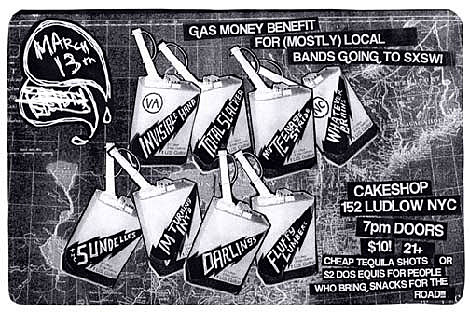 I feel like it goes without saying that all these bands written about this week will be heading to SXSW, including a bunch from here. Seven (mostly) local bands who are Austin-bound will be playing at Cake Shop on Saturday (3/13) which will serve as a gas money fundraiser for their trip down to Texas. Playing will be: Darlings, Sundelles, Total Slacker,  Big Troubles, I'm Turning Into, My Teenage Stride, pus Raleigh, NC's Whatever Brains, and Virgina's Invisible Hand. The $10 door gets split equally between all bands, who each get 20 minute sets. There's additional drink specials if you bring road snacks for the bands.

While I'm here, I should mention that one of my favorite songs of last year was My Teenage Stride's digital single "Creep Academy" which has just been pressed as a real 7" so I urge you to pick that up, as well as any other merch from the other bands that might suit your fancy. Extra gas and food money for the bands.

Fliers, tour dates and a few more daily picks below...

At Union Pool you can see twangy man choir Neckbeard Telecaster, as well as a solo set from one of the Neckbeards, Austin McCutchen, who'sjust released a very good EP that might have you nostalgic for the days of No Depression. 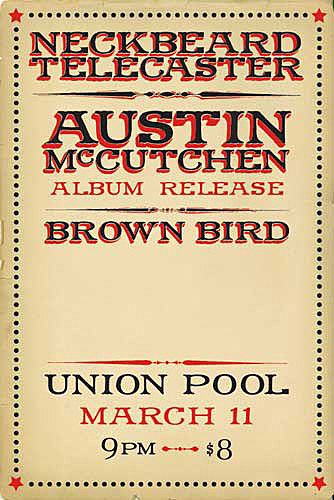 If you're not going to Woods at Music Hall or Free Energy at the Knit, you could check out Philadelphia's Drink Up Buttercup at Pianos. Their debut, Born and Thrown on a Hook, is out March 23.

That's enough for this weekend. Don't forget about the Brooklyn Vegan pre-SXSW party on Monday (3/15) with Casiokids, The Wave Pictures, Let's Wrestle, Banjo or Freakout and WhoMadeWho (and free PBR from 7-9 and me DJing). (tickets on sale) 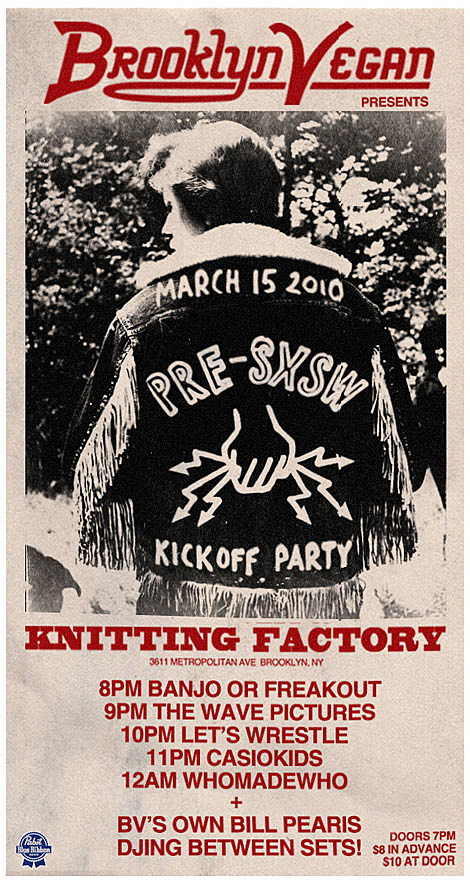