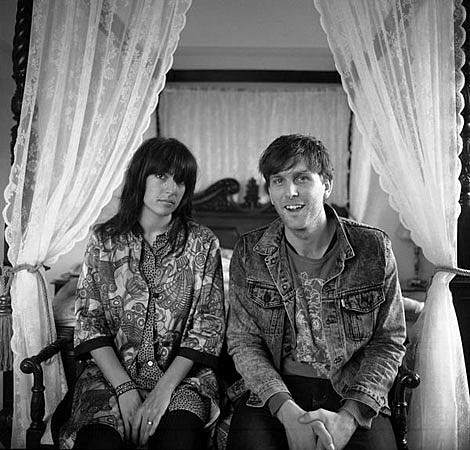 Improbable recipients of the prestigious Jazz In Sweden 2008 prize, Mariam and Andreas [the two members of Wildbirds & Peacedrums] used their winnings to record at the Soundtrack Of Our Lives-owned Svenska Grammofonstudion in Gothenburg. Vocals and drums were brilliantly recorded live to tape, and the spontaneity of the resulting album captures the intense bond between the couple, while expanding their sonic palette to include steel drum, piano, xylophone, marimba, Rhodes and more. "We tried to deconstruct the roles we have as a drummer/singer, so Mariam plays the same number of instruments as me," Andreas explains.

The Swedish group's second album, The Snake, just came out August 25th on Leaf Label. MP3 above. Video below.

Wildbirds & Peacedrums will be playing a trio of NYC gigs this September. The first is a "Wordless Music" show with Deerhoof at LPR on September 15th. The other two are a pair of opening dates for Fanfarlo at the Bowery Ballroom and the Bell House on September 21st and 22nd, respectively.

Speaking of Wordless Music openers, No Age's October 14th show at LPR will be opened by Woods. Tickets are still on sale.

All tour dates with their Black Cab Session and other videos below...