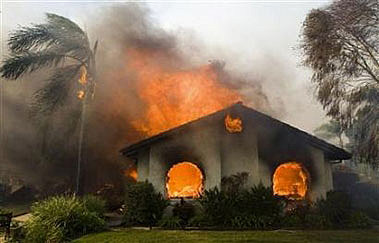 "At deadline, Los Angeles-based concert promoters AEG Live (and subsidiary Goldenvoice) and Nederlander Concerts hadn't reported any concert cancellations in Southern California. But the wind-driven blazes, which have already forced a reported half-million people to evacuate their homes, have caused Live Nation to cancel or postpone most concerts scheduled for this week, according to company officials.........a Jesus and Mary Chain gig at San Diego's 4th & B today has been cancelled. Ticket refunds for the latter are available at point of purchase." [Billboard]

Concert cancellations seem trivial in the scheme of things, but I guess each industry has to look at things from their own point of view, and the one we're interested around here (you and I) is music.