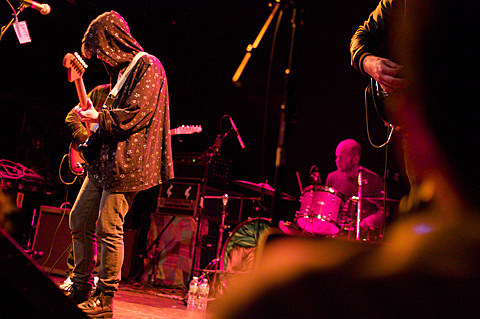 John Hunter of Lower Dens aka Glory Girls have replaced Lower Dens on tonight's Mercury Lounge show because Lower Dens had to cancel due to losing a member. The band posted this message last week:

"Our guitarist, and sometimes drummer, Will Adams, has decided to leave the band, due to exhaustion. As a result we are very sorry to announce the cancellation of some of our upcoming shows. Will's gonna be sorely missed, and we're not sure yet exactly what that will mean for the future of our band, but there will be one."

Lower Dens vocalist and guitarist Jana Hunter (brother of John) followed that up with:

"To be clear, we're still working things out after Will's departure, but we are BY NO MEANS breaking up, and we still plan on playing all the other shows we have scheduled this summer and beyond, including Marfa, Austin, Houston, NYC, etc. See yall soon. - jh"

One of thsoe upcoming shows they're still playing is at the South Street Seaport this summer. Another is part of Hopscotch, and they'll be at NXNE too. Baltimore City Paper has more info in a new interview with Jana.

Tara Jane O'Neil was also listed on tonight's show, but now the openers are Quilt, Battle Circus and Marlon Rando.

Other Lower Dens dates and a video of Glory Girls playing Glasslands, below...