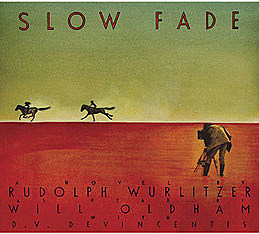 Will Oldham has a new release coming in the form of a Slow Fade audiobook...

Bonny reads Rudy! Sung and unsung heroes sink in the sunset in this 1984 novel. Until we put the print edition out this summer, you got to listen!

Read by Will Oldham with D.V. DeVincentis.

"The story alternates between [Wesley] Hardin in Santa Fe, Mexico, and New York --shooting a last-stand Western until the producer blows the whistle and shuts off the funds, generating a cinéma vérité chronicle of his own life--and A.D. and Walker writing their script on the road, so that each movement in the present is complemented by an additional piece of the past uncovered. Apart from generating a respectable amount of plot suspense, this narrative counterpoint allows Wurlitzer to pursue a satirical bent as he charts both fantasy trips, which becomes a contrast between the spiritual excesses of two generations: Yosemite Sam and Mr. Natural, each on a suicide mission." -- Jonathan Rosenbaum

Slow Fade is out digitally and on 5 CDs on April 19th via Drag City. A week later Will is hitting the road for a very short tour to help promote the book by reading from it live. On April 29th you can catch him at both Spoonbill & Sugartown in Brooklyn and at Anthology Film Archives in Manhattan. The latter's website points out that there will be musical accompaniment by Ben Chasny (SIX ORGANS OF ADMITTANCE). All dates below..