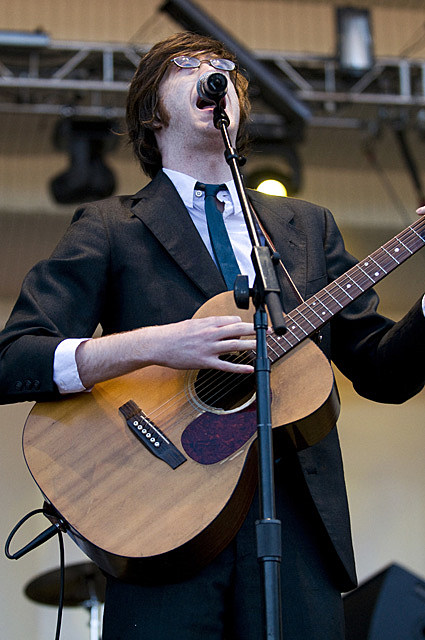 Okkervil River's Will Sheff will be playing a solo show at Music Hall of Williamsburg in Brooklyn on December 11th. Joining him on the bill is another great indie rock frontman, Charles Bissell of the Wrens, and Bird of Youth who are a Brooklyn band whose debut album (not out yet) was produced by Will (also, according to Wikipedia, "In college, Sheff originally wanted to be a filmmaker. He is currently dating Beth Wawerna of Bird of Youth"). Tickets for the Brooklyn show are on sale (at noon).

Bird of Youth also have another Brooklyn show coming up even sooner, with, ANOTHER indie rock frontman gone solo, The New Pornographers' AC Newman. That one is, as previously annnounced, at the Bell House on November 15th. Bird of Youth posted the info that, "rounding out the b.o.y. line-up for this show is: beth wawerna, clinton newman, johnny north, ira elliot and timothy bracy." Continuing with the frontman theme, you may recognize the name Timothy Bracy. He was the man behind the vocals in The Mendoza Line. And is Clinton Newman related to Carl (AC)?

The AC MP3 above is from AC's new album, Get Guilty, out January 20th on Matador.

There are two videos below. The first is Clinton, Timothy and Beth (aka a trio version of Bird of Youth) performing Okkervil River's "Pop Lie". The second is Will and AC performing Okkervil's "Lost Coastlines" (MP3 for the same song above too). Okkervil and everyone's tour dates down there too..