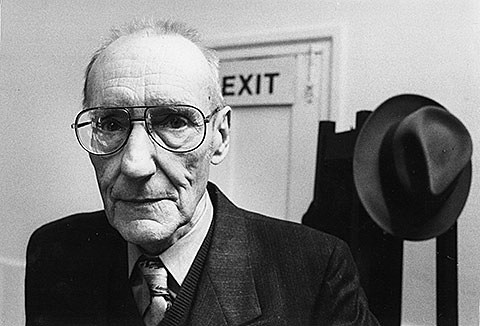 Literary and postmodern icon William S Burroughs, who died in 1997, would have turned 100 this year and there are Centenary celebration events happening all over the world. In New York, WSB100 (which was [and still is] being funded by an Indiegogo campaign) is happening the entire month of April at various venues around the the city:

You can buy a festival pass for $100 that gets you in to all the WSB events, or buy individual tickets.

On the musical side, the WSB100 takes over The Stone this month through April 20. Tonight is Kenny Wollesen at 8 PM and Ariana Reiens at 10 PM. Other notable nights include Thurston Moore (Sonic Youth played on WSB's 1990 album Dead City Radio) on April 17; John Zorn and Bill Laswell on April 19; Hal Willner, Bill Frisell, Eyvind Kang and Lenny Pickett on April 20. No advance tickets for these shows.

Then on April 21 at Issue Project Room, Elliot Sharp and Steve Buscemi will have a collaborative performance, creating "a collage of sound and words integrating texts by William S. Burroughs with Elliott Sharp's vast soundworlds." Buscemi spent a lot of time with Burroughs in the author's later years and currently has a screenplay of Burroughs' Queer in development. Tickets are on sale.

On April 22 at the Incubator Arts Project it's a collaborative performance by Lydia Lunch and Quintan Ana Wikswo. Tickets are on sale. Then on April 23 at Poetry Project, there is a "reading marathon" featuring Anne Waldman, Penny Arcade, Genesis Breyer P-Orridge, JG Thirlwell, Lydia Lunch, Elliott Sharp, Sam Mickens, and many more. Full line-up and more info is here.

There are more events happening too. Details are at WSB100 but the full schedule is listed, along with a few Burroughs-related videos, below...