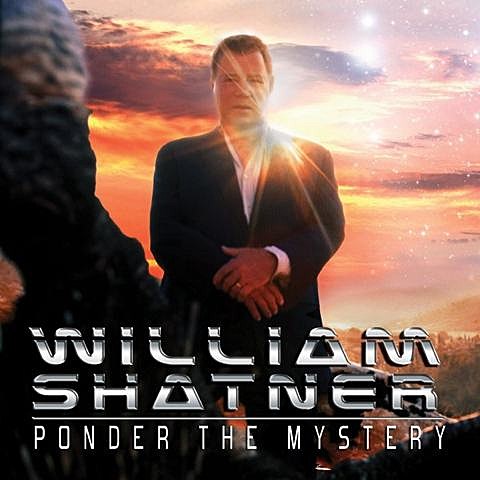 So this isn't entirely new info. Famed Star Trek star/all-around weird dude William Shatner discussed his upcoming prog rock collaboration with Yes guitarist/keyboardist Billy Sherwood in a Rolling Stone interview back in September. The album will apparently pair a bunch of Sherwood-penned prog tunes with Shatner's "original spoken word poetry"; one can only hope that such a pairing is as insane in practice as it sounds on paper. Shatner was in rare form for the interview; here are just some gems among many:

"The label came to me and said, "Would you like to do another album?" and I said, "Absolutely." Then they said, "Well, what would you like to do?" In that moment, I had a creative thought. I said, "I'll take that period of time, an hour before sunset, where a guy is at the beach and in despair about his life, and write music that goes through twilight and sunset into the sounds of the night. Gradually, with the beauty of the night and his thinking, he regains the joy of his life.""

"I think that prog rock is the science fiction of music."

"I'd love to be part of a discussion of where progressive rock ends and country music begins."

"Well, it's up to you to convince [listeners] that it's not a novelty record."

This isn't Shatner's first go-round with the music business; he recorded a 'metal album' a few years back, made a record (and covered Pulp) with Ben Folds in 2004, and the roots of his musical career go back to the '60s with his cult classic The Transformed Man.

But Shatner has revealed the details of the upcoming prog album -- entitled Ponder the Mystery, duh -- and judging by what we know so far, this might be the single most absurdly Shatnerian media event ever. It's out next week (10/8) via Cleopatra Records. Here's a bit of the press release:

"As word began to circulate about William Shatner's newest musical project, the prog rock concept album Ponder The Mystery, critics and fans quickly realized it was a match made, if not in Heaven, then in the most glorious reaches of the galaxy. Shatner is after all an enormously popular and celebrated icon of science fiction fantasy, and no musical genre is as invested in, devoted to or driven by fantasy and the imaginative as progressive rock. And though Mr. Shatner is no stranger to the musical world, what sets this effort apart from previous endeavors is the fact that he co-wrote the album, penning a set of intensely personal lyrics for producer/multi-instrumentalist Billy Sherwood (of the prog rock institution Yes) to compose around. And now, after months of puzzled rumors, probing questions and ponderous speculation, the album is finally ready to be embraced by the general public; it will be released on CD, vinyl and digital formats October 8, 2013.

My brain starts to ache when I try to imagine the specifics of what this album is going to sound like, but I do not exaggerate when I say that I can't wait to hear what this sounds like. Hopefully it will be the technicolor rainbow space vomit of cleanly-produced sound that this insane list of guests implies. There are some sound snippets over at Amazon.

Oh, and he'll be performing the album live. No East Coast dates have been announced but he'll be playing shows in California later this month and those are listed below. Shatner told The Beach Reporter if they go well, there may be more. "I'm feeling the audience out to see whether it's as good as I think it is and whether we should go on with it or not. In effect, Hermosa Beach is a testing ground. This is a new experience for everyone."

In all seriousness, kudos to Shatner for staying creatively active after all these years. Ponder the Mystery comes out on 10/8; keep an eye out for some streaming samples. Meanwhile, check out the tracklist and list of live dates, below.