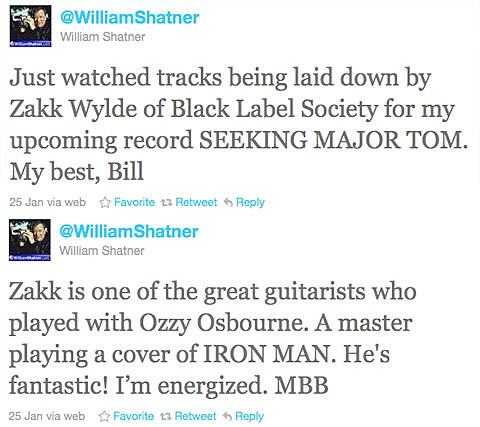 Peter Frampton and Mike Inez (who will be playing Iron Man with fellow Ozzy alum, Zakk Wylde) are definitely participating and our sources claims artists slated to perform (but who haven't done their parts yet) include Steve Howe of Yes, Ian Paice of Deep Purple and the god among men, Brian May of Queen. Supposedly it's only a matter of scheduling that prevents confirmation (come on May, make this happen!). Finally, it wouldn't be a space themed album without the space man and his self proclaimed Space Bass, Bootsy Collins! -[LA Weekly]

According to that same article, the final William Shatner collaborator list is still tentative, but Seeking Major Tom will contain twenty tracks including covers of "Bohemian Rhapsody", the previously mentioned "Iron Man", "Learn to Fly", and the Thomas Dolby 80s classic that has Shatner's name all over it, "She Blinded Me With Science". No word on when the LP will surface, but until then, check out some video of Shatner covering Cee-Lo's "F*ck You" and Pulp's "Common People".

Speaking of Pulp, the band recently reunited and have been adding European dates ever since. Full Pulp tour schedule alongside video of some other Shatner classics are below...