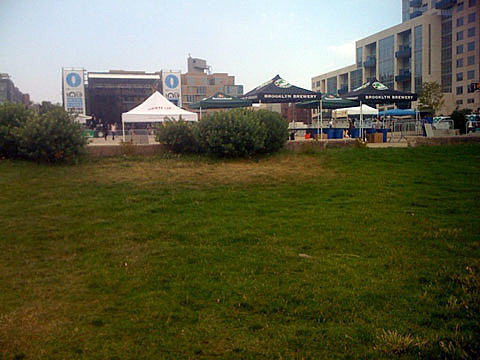 Band of Horses had a busy weekend: Friday night they played Vanderbilt Hall at Grand Central Terminal, Saturday they opened for Broken Social Scene and Pavement on Toronto Island, and Sunday they headlined their own sold-out gig at Williamsburg Waterfront, the first show of the season there, with Grizzly Bear and Karen Elson opening. Pictures on the way.

It was the first show at the Brooklyn park that was put on by AEG and Open Space Alliance (OSA). Like they did at McCarren, together they're running the ticketed shows at the Waterfront...

"After OSA managed more than 60 McCarren Park Pool events, we successfully negotiated a new venue for the music to continue. This summer, OSA will present and manage concerts on the Williamsburg waterfront. There are a number of benefit concerts that help us subsidize free programming, and raise funds for parks improvements." [OSA]

Sunday's Band of Horses shows was one of those "benefit" concerts. The next of those is Silversun Pickups, Against Me! and The Henry Clay People on Friday, June 25th.

The most obvious difference from the 2009 JellyNYC Pool Parties is the stage's new location and bigger size. The stage is now on the park's east side, facing the water. That means the setting sun is no longer shining in the crowd's eyes (good) but you'll have to turn around to get a view of the Manhattan skyline (bad). The soundsystem was also reportedly better. That said, the stage is being taken up and down before and after each of the ticketed shows, so it remains to be seen what they'll come up with for the upcoming free events at the venue, or even the future ticketed shows.

The showgoing area is fenced in a bit different than last year's Pool Parties, and since they are pay shows don't expect to be able to see for free. Like they do in Prospect Park, Rachel Kowal said, "they put up huge banners on the fence blocking even the most minimal view". Again, it was the first show there this summer, so there's no guarantee things will stay the same. Hopefully that's at least true of the concession and beer lines (which we heard took up to 40 minutes).

The same park will be home once again to the Jelly NYC Pool Parties, whose seven (not eight) free shows kick off July 11th. We're told the still-TBA series has a good chance of getting announced this week. We also have some guesses out there already on who will appear on the lineup.

(also worth noting - two of Sunday's bands are Pool Party alums - Grizzly Bear closed the free series in 2009, and Band of Horses played the Pool in 2007.)

Grizzly Bear have another outdoor show this summer - they play Governors Island (also ticketed) on August 12th with the Walkmen and Gang Gang Dance. Tickets are still on sale.

We'll have pictures from the show coming later. For now, one more pic and some videos from the gig are posted below... 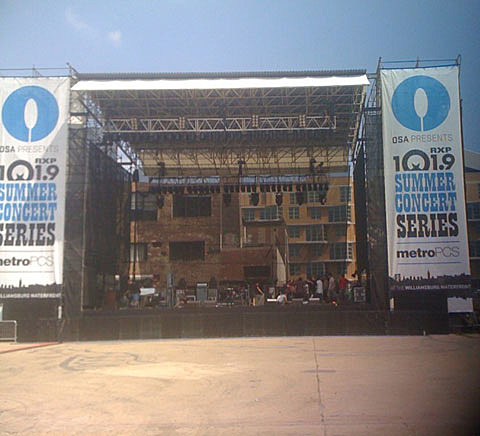 Band of Horses at Williamsburg Waterfront, beginning of Funeral