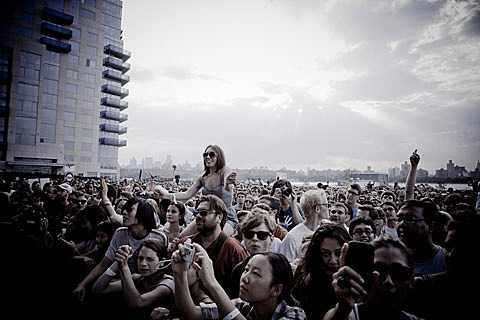 As I previously wrote, "there will be concerts at the Williamsburg Waterfront this summer. In fact, the plan is to have 10 ticketed shows and 5 free shows." And, "The five free concert dates are still TBD, but one will be of a classical/philharmonic nature, and one will be geared towards kids. The free shows may or may not be on Sundays or even on weekends, and they will definitely not have anything to do with Jelly."

Since then three ticketed shows have been announced: Kid Cudi on Wednesday, July 6th (on sale), Death Cab For Cutie/Frightened Rabbit on Tuesday, August 2nd (on sale 5/6, but a presale starts 4/29), and Sonic Youth/Wild Flag on Friday, August 12th (on sale Friday). Seven more announcements to come.

Service Charge-free tickets are available at the Best Buy Theater Box Office (44th and Broadway in Manhattan) and at Sound Fix Records (44 Berry St. at North 11th St. in Brooklyn).

Two of the five free shows have also now been announced. The first is nothing like what Jelly would have booked: Coheed and Cambria, Adrian Belew Power Trio, and Tigers Jaw play the Williamsburg Waterfront on Saturday, June 11th. The second is sort of like what Jelly might have booked, but more closely resembles what you'd get at Celebrate Brooklyn: Eugene Mirman "& Pretty Good Friends Featuring Kristen Schaal & Many Surprise Guests" open for They Might Be Giants at Wiliamsburg Waterfront on Friday, July 29th.

Assuming TMBG won't be playing a kids set, and that the comedians will tell a few dirty jokes, the free kids show announcement is still to come, as is the classical concert date info (which means just one more completely unknown free lineup to come). Both announced free shows open their doors at 5:30pm.

All five shows, ticketed and free, are part of the "2011 T-MOBILE WILLIAMSBURG WATERFRONT CONCERT SERIES PRESENTED BY OSA" and "supported by Onitsuka Tiger, Vitamin Water, and Brooklyn Brewery."

All five shows are listed in an easy-to-read format below....