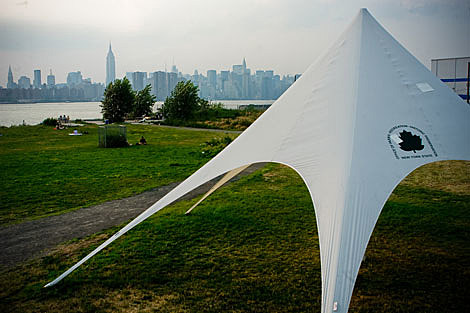 "McCarren Park Pool, the crumbling, Depression-era public swimming pool on the border between Williamsburg and Greenpoint in Brooklyn, is set to become a swimming spot again, but the concerts that put it on the rock map over the last three summers are set to move to the Williamsburg waterfront. Stephanie Thayer, executive director of the Open Space Alliance for North Brooklyn, a nonprofit group that coordinated last year's concerts, said that a strip along the East River between North Eighth and North Ninth Streets that was designated a New York State park a few years ago will have concerts this summer, with room for 6,000 fans. The news was confirmed by the office of State Assemblyman Joseph R. Lentol, who represents Greenpoint and Williamsburg. "This is the continuation of McCarren Park Pool," Ms. Thayer said. "It's different, but it has its own exquisite beauty, with the waterfront and the skyline of Manhattan." She added that she plans to work with many of the promoters who put on events at the pool, but that if enough sponsorship money comes through, she hopes to also put on classical and opera concerts as well. Ms. Thayer, who in addition to her role with the Open Space Alliance is an administrator with the City Parks Department, said that renovations on McCarren Pool were set to begin on schedule this summer." [NY Times]

The new location (where the Boredoms' 88 Boadrum took place in August) was being discussed as a possibility last summer, so this official confirmation is great news.

above photo by Ryan Muir