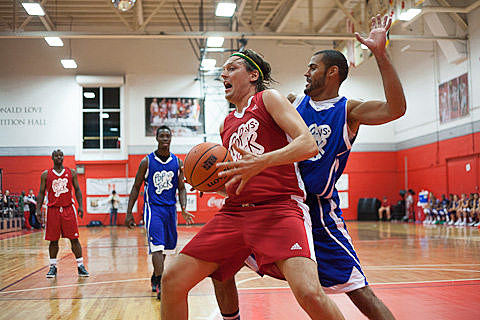 Win Butler is returning to Madison Square Garden next week (2/13) -- not with Arcade Fire, but to play basketball on the Sprint NBA All-Star Celebrity Game. He'll join Common, Kevin Hart, Nick Cannon, Michael Rapaport, Anthony Anderson and other stars of stage and screen. Win is becoming almost as known for his court skills as his musicianship. Almost. The two All-Star Celebrity teams will be coached by Spike Lee & New York Knicks' Carmelo Anthony, and ESPN Radio's Mike Golic & Mike Greenberg. It's sold out but you can watch it live on ESPN on Friday, February 13 at 7 PM.

That is part of the NBA's All-Star Weekend that includes the All-Star Saturday Night at Barclays on February 14 and the actual NBA All-Star Game on February 15.

Sprite, one of the All-Star sponsors, is also throwing a private Drake and Nas concert on February 13 at Irving Plaza, as Gawker detailed a few days ago. Sprite's Slam Dunk Contest, part of the Barclays 2/14 event, happens right after the Taco Bell Skills Test and the Foot Locker Three-Point Contest, if you were wondering.

That same weekend, Win DJs NYC twice as DJ Windows 98. His first gig is The Hold Steady's Bowery Ballroom show on February 13 (which seems impossible since the game is that night, unless he DJs really late), and then he does it again at Baby's All Right on Valentine's Day.

Win's brother, Will, will be in NYC next month, touring for his solo debut.