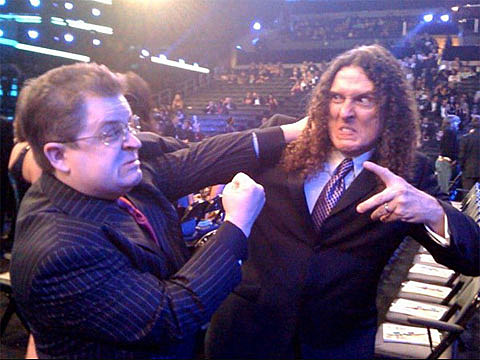 Just shy of his 42nd birthday, comedic legend Patton Oswalt has done more with his time on earth than most people could ever dream of. He has conquered the art of stand-up, he has lent his acting talents to television and film, he has voiced a number of animated characters both mainstream and cult, he has had his own television specials, and he has had his comedy made a permanent record with several CD and DVD releases. He was even steps away from starring in a Broadway play, but twatress extraordinaire Megan Mullally, who tried to have Patton fired for his lack of stage experience, quit the play and the production folded entirely. This is a man who didn't get to where he is today because of luck. And certainly not because of good looks. This man got to where he is through relentless hard-motherf*cking-work and tenacity.

And just when I thought Patton'd cover'd everything, he goes ahead and enters the world of literature with his epic tome Zombie Spaceship Wasteland: A Book by Patton Oswalt (release date January 4th, 2011). Like Columbine, this is one of the few books in recent memory that I simply could not put down. Besides being funny as hell, having been raised in similar environs as Patton the book was eerily relatable. There is absolutely no pretense in his style; it is straight up Patton Oswalt talking right to your brain through the written word. It is smart, direct, hilarious, profound, often times touching writing from beginning to end.

HEADS UP! Before scrambling over to Amazon or wherever to get your copy, there are a few more exciting ways to obtain this book. First, I have a few copies to give away! Follow the contest instructions below and maybe you'll get lucky. A second option would be to buy a ticket to a Patton Oswalt Book Event at Warsaw on January 8th at 5 pm. The Warsaw event is presented by Word Bookstore. Attending the Warsaw event is kind of a no brainer, people. The event costs $25, which gets you admission to the event and a copy of the book, which Patton will sign. The retail price of the book is $24.00. So for a dollar above cover price, and no tax, you get the book, see Patton, and get an autograph. Don't be stoopid!

There is no doubt the Warsaw book event will sell out, but have no fear. As previously mentioned, Patton will be back in town January 7th and 8th for FOUR SHOWS at Caroline's in Times Square. I know BV comedy fans aren't thrilled with Caroline's ticket prices, drink requirements, and clientele, and the promise of new material might not be enough to take the plunge. Luckily, your man Klaus has you covered. Well, a few of you. I have two pairs of tickets to giveaway! See contest instructions below! Tour dates, including other NYC in-store book events below too...

TO WIN A COPY OF PATTON'S BOOK: email BVCONTESTS@HOTMAIL.COM (subject: PATTON BOOK). Include your first name, last name, and mailing address. Winners will be contacted soon!

TO WIN A PAIR OF TICKETS TO SEE PATTON AT CAROLINE'S: email BVCONTESTS@HOTMAIL.COM (subject: PATTON CAROLINES). Include your first name, last name, cell number and which show you want to see (January 7th, 8pm or 10pm OR January 8th 8pm or 10pm) . Winners will be contacted soon!