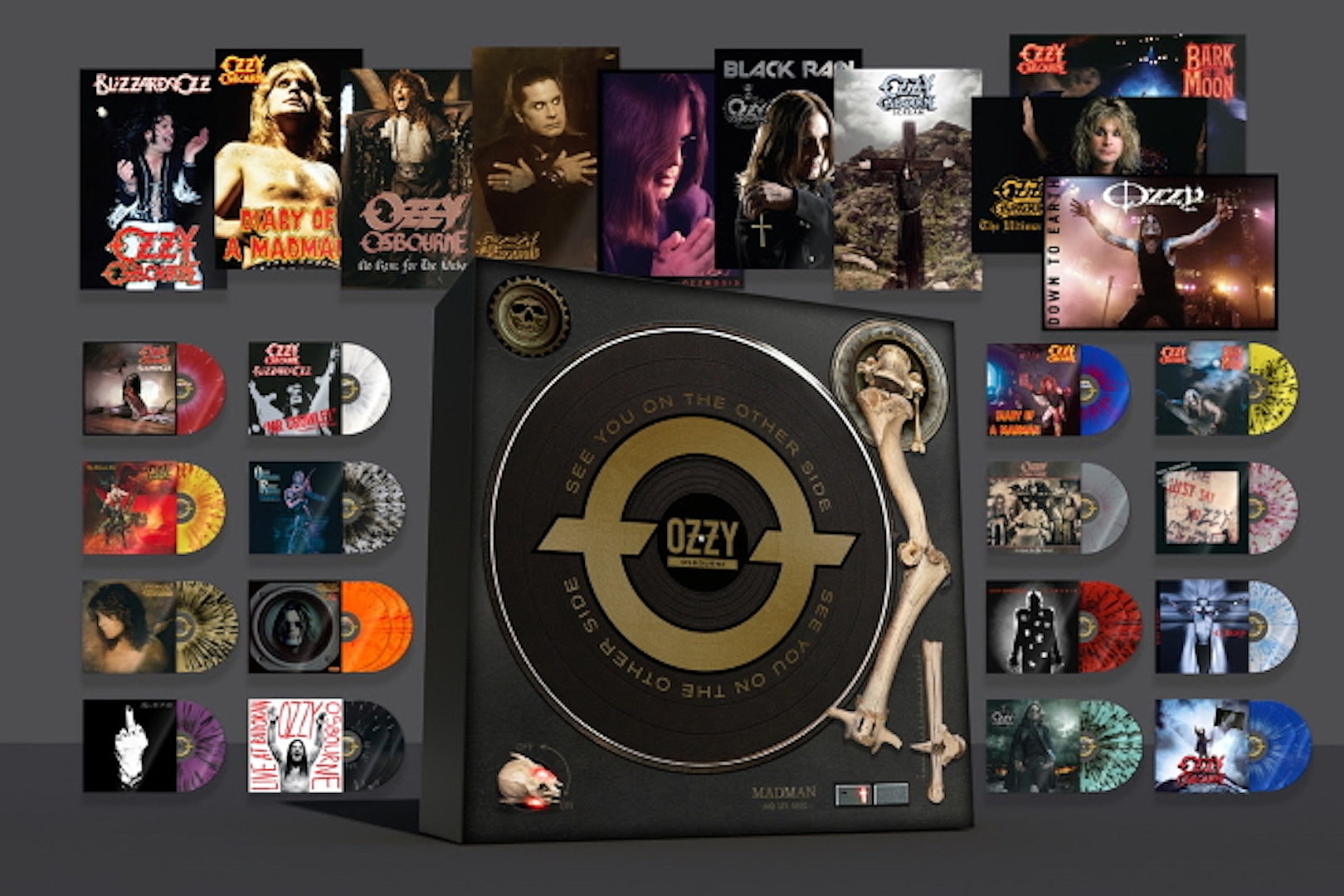 Ozzy Osbourne's solo debut Blizzard of Ozz came out 40 years ago on Sunday (9/20), marking the ruby anniversary of his solo career! To celebrate, he released a special 40th Anniversary Expanded Edition of that record, some new merch, and a new animated video of "Crazy Train," which you can check out below.

The majority of Ozzy's solo career (excluding his 2020 album Ordinary Man) is collected in an insane, limited edition vinyl box set, See You On The Other Side. It contains 16 albums (pictured above), each pressed by hand onto one-of-a-kind multi-colored splatter vinyl, comprising 173 songs. Some of the albums are out of print on vinyl, while others were previously unavailable, including Black Rain, Down to Earth and Scream, which weren't pressed to vinyl in the US, and No More Tears, which has been remastered onto a 2 LP set. It also includes Flippin' The B Side, a collection of non-album tracks. In addition, the box set includes ten 24x36" posters, twelve augmented reality experiences, AND a signed certificate of authenticity hand-numbered by Ozzy. A full list of the musical contents and a commercial for the set starring Zakk Wylde, can be viewed below.

“This one’s the most elaborate collection so far,” OZZY says. “It’s very well thought-out and well put together. It’s got everything in there that you possibly could want and some surprises along the way. The sound of a vinyl record is different, and I do believe that vinyl sounds better.”

A winner will be chosen at random and contacted. Good luck!

There's a 50th anniversary box set of Black Sabbath's Paranoid due out in October.

See You On The Other Side Contents:

Flippin’ The B Side (a new collection of non-LP tracks)

Side A
“You Looking At Me Looking At You
Originally from the “Crazy Train” UK 7” single, released 1980

“Hero”
Originally a hidden track from the “No Rest For The Wicked” US CD and cassette release, released 1988

Side B
“Party With The Animals”
Originally from the “Mama I’m Coming Home” US CD single, released 1992

“Living With The Enemy”
Originally from the “Perry Mason” UK CD single, released 1995

“Voodoo Dancer”
Originally from the “I Just Want You” UK CD single, released 1996

“Back On Earth”
Originally from “The Ozzman Cometh” compilation, released 1997

“No Place For Angels”
Originally from the “Gets Me Through” CD single, released 2001

“Walk On Water”
Originally released on “Prince Of Darkness,” released 2005