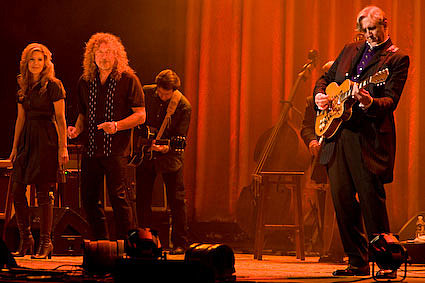 Buoyed by its success, the pair has launched a major tour that wafted through the WaMu Theater at Madison Square Garden on Tuesday night.

Zeppelin fans may curse the day this tour was conceived, since it prevented - or at least delayed - a full-scale road show for Plant's storied band, something that has been rumored ever since that act floored the rock world with last year's one-off reunion gig in London.

A fully-Led'ed road show may yet happen. But in the meantime, no informed aficionado of Plant's talents - or Krauss' - would have felt betrayed by last night's tender display.
[Jim Farber - The Daily News]

I have a pair of tickets to give away for tonight's show (June 11, 2008). If you want them email BVCONTESTS@HOTMAIL.COM (subject: Plant). Include your name and mention which song Led Zeppelin opened with in London. One winner will be picked and contacted before 5pm.

We're also still giving away tickets to the festival in Staten Island this weekend.