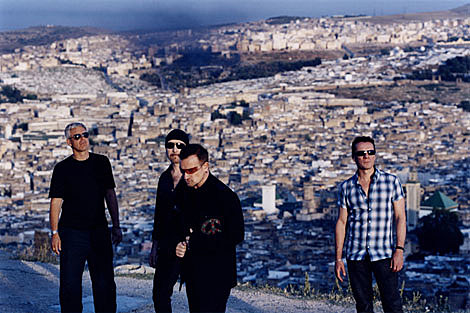 Though tickets to Late Show with David Letterman show are free, they aren't necessarily easy to land for the date of your choice. U2 week is probably especially hard, which is why I was more than happy to be able to give away a pair of tickets for two of the shows. I have a pair for the first show which tapes Monday March 2nd, at the Ed Sullivan Theater (1697 Broadway) in NYC, from 4:30-5:30 PM. And I have a pair for the show that tapes that same day, at the same location, from 7-8 PM.

"Get On Your Boots""

TO WIN A PAIR OF TICKETS TO LETTERMAN: Email BVCONTESTS@HOTMAIL.COM (subject: Monday Early or Monday Late). Don't put all of that in the subject line, just the taping you want. Include your full name and your age. One winner will be picked randomly from each group and contacted with further instructions. Contest ends Friday (2/27) at 2pm. Good luck!