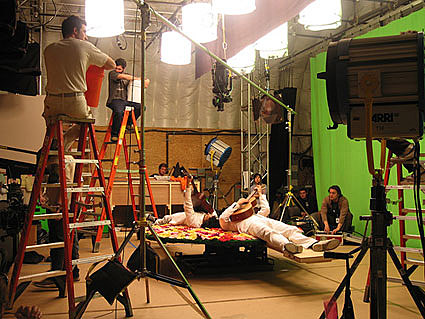 No sooner did we express our love for Flight of the Concords, than we were contacted by those involved with the series inviting us to a screening of the first episode at the Tribeca Grand Hotel in NYC this Thursday May 17th (8:30pm). It gets better – they’re giving us 10 PAIRS of tickets to give away to said screening. BUT THAT'S NOT ALL - for those not in NYC (or for those in NYC that are TOO busy on Thursday), we've also got five Flight of the Conchords prize packs (DVD, t-shirt, etc) to give away. To enter to win one of these 15 prizes, E-mail BVCONTESTS@HOTMAIL.COM (subject: FOC). Tell us your favorite stand up comedian. Include your first and last name as you would like it to appear on the guestlist. Winners will be contacted via email. Losers will not. 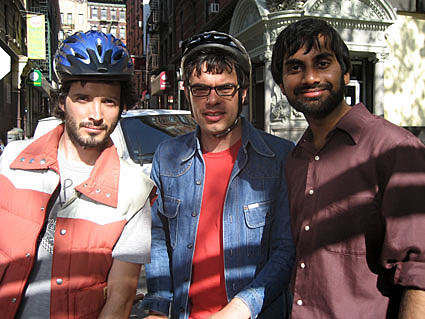 In the meantime, the Conchords are, and have been, filming all over NYC - possibly in your apartment. Just the other day they did some outdoor filming with special guest Aziz Ansari - another awesome addition to an already insane guest roster.

In related news, I sincerely hope you've been watching The Human Giant on MTV, people. The core cast of Aziz Ansari, Rob Huebel, and Paul Scheer and the masterful direction of Jason Woliner has made it one of the greatest comedy shows to hit the tube in recent memory. Add special guests such as Patton Oswalt, Jon Benjamin, Jon Glaser, Brian Posehn, Jonah Ray and Ghostface Killah to the mix, and you've got the concept of 'must-see TV' redefined.

And speaking of Jason Woliner, he was recently interviewed by Aspecialthing. Read it HERE. Though the three main stars of the show get the most exposure, it should be noted that the show wouldn't be what it is without Jason. As Sub Pop's Patton Oswalt once said...

He's as crucial to the success of Human Giant as the writing and acting abilities of its stars. He's a sharp comedic actor himself, as well as infinitely patient and instinctive, so he always knows how to get maximum wattage out of every sketch.

Are you going to Bonnarroo this year? In addition to some pretty dope musical acts, they also have a comedy tent featuring many of the comedians featured elsewhere in this post - like YO LA TENGO REVIEWER David Cross, Flight of the Conchords, and Aziz Ansari. They also have the amazing talents of Lewis Black, Dave Attell, Demetri Martin, Finesse Mitchell, Dov Davidoff, Nick Kroll, John Bowman, and Lynne Koplitz.

And speaking of music festivals and Aziz Ansari........

David Cross, Eugene Mirman, Todd Barry, Kristen Schaal and many more special guests will be doing a very long run of shows at the famed rock venue 100 Club in quaint old London England. The show is entitled A Really Lovely Night Out With David Cross and Friends . The shows are going to be at 8:30pm June 19 - 23 and June 26-30. That's 10 shows! If you're from England or will be in England, buy your tickets HERE

You can also see Todd Barry at a gig in Queens

TONIGHT: The Daily show takes over the Lower East Side. (May 14)