Chelsea Wolfe at Highline Ballroom in 2012 (more by Greg Cristman) 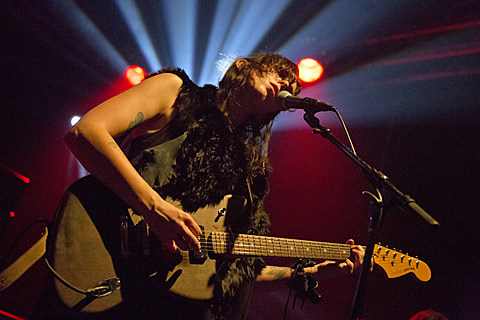 As mentioned, Chelsea Wolfe (with Ben Chisholm on analog synths/bass/keys and Andrea Calderon on violin) is going on an acoustic tour with King Dude which hits NYC on January 26 at Music Hall of Williamsburg with Starred. Tickets for that show are still available and we're also giving away a pair.

A list of updated dates, contest details, and a stream of Chelsea Wolfe's acoustic album, Unknown Rooms, below...

--
For a chance at winning tickets to Chelsea Wolfe at Music Hall of Williamsburg: either tweet something that includes both @BrooklynVegan AND "CHELSEA WOLFE" in the tweet, or send an email to BVCONTESTS@HOTMAIL.COM with the subject line "CHELSEA WOLFE". Include your first and last name in the email. We'll pick a winner at random and contact them with more details. If you enter by email, it will not be shared with anyone else. Good luck!