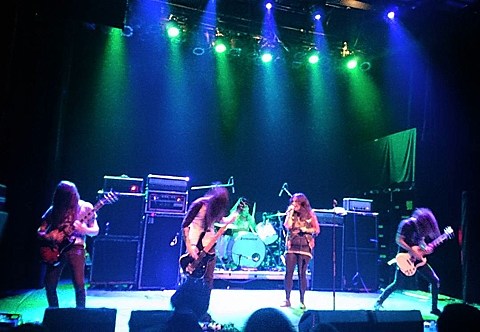 Windhand kicked off their US tour behind their new album Grief's Infernal Flower in NYC last Wednesday (10/21). Dorthia Cottrell and company played Gramercy Theatre with tourmates Danava and Monolord. Anyone catch it?

It was a busy night for NYC metalheads, what with the Danzig/Superjoint show at the Playstation Theater and the Kylesa/Inter Arma/Indian Handcrafts tour hitting Saint Vitus. Irata would have played Saint Vitus too, but unfortunately had to cancel the rest of their dates on the tour due to a leg infection sustained by their drummer Jason Ward.

Windhand, Danava, and Monolord will be on tour for the next month or so, including a stop in Austin for a Fun Fun Fun Fest NITES show. Danava and Monolord also just tacked on their own NYC show without Windhand for November 16 at Saint Vitus with Tower. Tickets for that show are on sale now. Updated dates are listed below.

Windhand also recently released a video for the track "Two Urns" off their new album. You can check that out below...