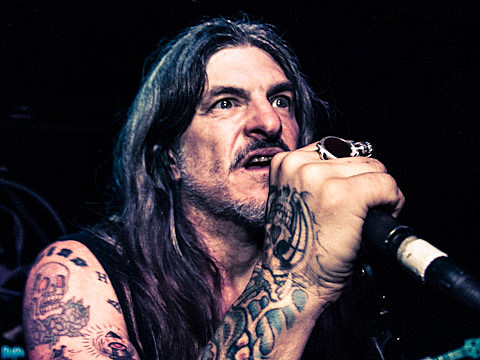 When we last heard from Scott "Wino" Weinrich, he was being deported from Norway for possession of methamphetamine during a St. Vitus tour and subsequently pledging to get clean and continue with his work. It would seem now that he's making good on at least part of that promise, with the welcome news that he'll be performing solo and headlining the Feast of Krampus shows that will take place in NYC and Philadelphia. Conceived as a darker, more-pagan-oriented holiday celebration, the shows are named after Krampus, the demonic Alpine beast from traditional European folklore. Sounds like the perfect way for Wino to get back on the performing horse.

The Philadelphia show will take place on December 27 at Underground Arts and will feature Sixty Watt Shaman, Wizard Eye, Skeleton Hands and Chimpgrinder, and tickets are on sale now. The NYC show will be on December 28 at Saint Vitus and will also feature Sixty Watt Shaman, as well as Godmaker, Birch Hill Dam, Moon Tooth and Buzzard Canyon. Tickets for that sure-to-be-occult show are also currently on sale.

Check out a video of Saint Vitus playing Saint Vitus in 2013 (via Pit Full of Shit) below...