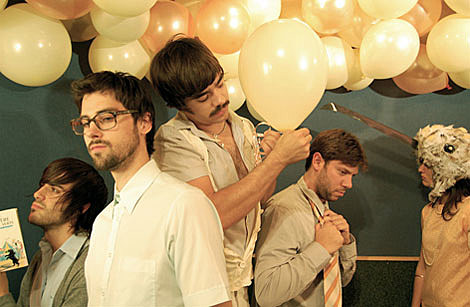 Winter Gloves, who got stuck at the border when they were supposed to play here last month, are coming back to the US for a short tour in May, including a May 13 stop at Mercury Lounge. Here's what I said last time:

I caught Winter Gloves last November at M for Montreal where they were already local favorites. Not dissimilar from Tokyo Police Club, we're talking keyboard-driven dance rock with a lot of participatory handclapping. "Let Me Drive," which you can download at the top of this post, is pretty typical of their debut album, About a Girl, which came out last year. They're great live and worth the $8 alone.

In addition to "Let Me Drive," check out their cover of "Smells Like Teen Spirit" the band recorded recently in tribute to the 15th anniversary of Kurt Cobain's death.

The Mercury Lounge show (tickets) is a great bill: BV-faves Wye Oak headline the show, and Cincinatti's fine Pomegranates also play, so that's three worthy bands. Wye Oak and Pomegrantes are on tour together and played the Bell House in Brooklyn with Croooked Finges the other night. Check out Pomegranates' "Corriander" above too.

Before heading across the border, Winter Gloves will be doing a series of opening dates for Thunderheist in Canada. All dates and the video below...