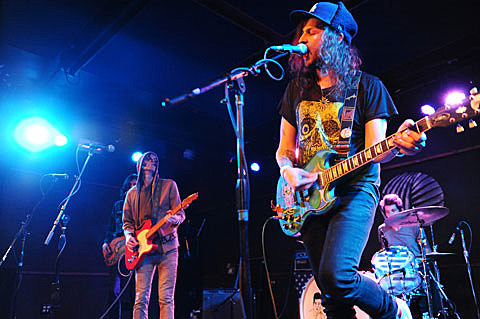 For me, the best moment of SXSW 2012, came late Saturday night. The Spider House, a coffee/bar/venue about 3 miles north of the main drag, threw a seven-stage all-day show with Burger Records. A bit after midnight, King Tuff took the main stage, a plush ballroom with disco ball queasily spinning overhead. I'd seen the band play one night before at the Sub Pop showcase at Red 7, where they focused on their new, great self-titled LP, out May 29 on the label. There, the front of the crowd danced around prodded by the trio's radiant weirdness, but here, King Tuff, in matching USA-themed outfits, completely unleashed on their instruments and the crowd followed suit. Some videos can be watched below.

The new Sub Pop release, the follow-up to 2008's Was Dead, features the new single "Bad Thing", which is available at Sub Pop for the price of an email address.

King Tuff's last NYC show was January 2011, and another is long overdue, so here's hoping the new album brings him back to the East Coast. No "King Tuff" dates to report at the moment, but....

Meanwhile, the Tee Pee-signed Witch will headline a one-off NYC show at Santos on April 9th. Support for the show has not been announced, but you can expect Witch to feature the lineup of Dave Sweetapple (Sweet Apple), J.Mascis (Dinosaur Jr.), Graham Clise (Annihilation Time/Lecherous Gaze), and Kyle Thomas (King Tuff). Tickets are on sale.

J Mascis also has a special show coming up at Le Poisson Rouge in May.

Check out some live video of Dinosaur Jr in action at SXSW 2012, and King Tuff too, below.