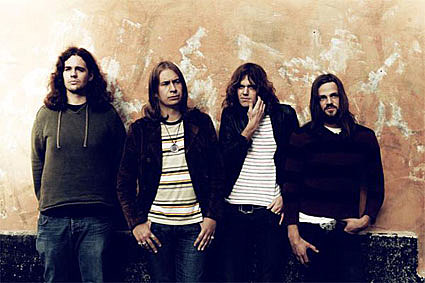 Swede mages Witchcraft have a handful of planned dates trickling out, including a show at Bowery Ballroom on September 17th with compatriots (in nationality and inspiration) Graveyard and Brooklyn's own TK Webb & The Visions. Tickets go on sale August 1st at noon. Peep the list of dates so far, down below.

Witchcraft is also on board for Lollapalooza 2008 - the only band playing Lolla AND the dying Ozzfest in the same week. Unfortunately, like Radiohead and Rage Against The Machine, Witchcraft's performance won't be viewable from the live stream. Wilco, Broken Social Scene, The National, The Raconteurs, Stephen Malkmus, and many others will be though.

Witchcraft will also be intersecting with a Witch (minus the -craft) tour in LA with Ancestors. Starting September 19th, Graveyard is touring with The Sword and Clutch.

Ancestors have a new album on the way, Neptune With Fire, due on August 19th on Tee Pee. Ancestor, the new album by TK Webb & The Visions, is due September 2nd on Kemado. Dates below...