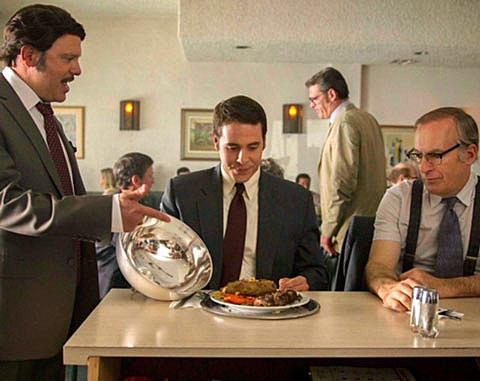 Your man Klaus is a little late to the announcement party, but that is how I roll. Comedy legends Bob Odenkirk and David Cross have wrapped up production of their new Netlix-only sketch comedy show With Bob and David and a release date has been set; November 13, 2015!

As a fledgling comedy aficionado in the mid-90s, Mr. Show With Bob and David was my bible and Bob and David were my Christs. I had been a Monty Python fan since I could understand English and, to me, Bob and David carried that marriage of irreverent live-action and pre-recorded material sensibility into a "hipper," more profane and contemporary arena. And although they reunited for a live tour in 2002 and for the production of Mr. Show movie Run Ronnie Run, Mr. Show superfans like me have always hungered for an all out, full-fledged, Mr. Show reunion series. Thank Cod for Netflix. The official teaser for "With Bob and David" (also featuring Brian Posehn) and some of my favorite Mr. Show sketches are below.

Meanwhile, fellow Emersonian, college drop-out, Emmy Award winner, Klaus-favorite, and indie comedy legend David Cross has really been making the rounds on the NYC comedy scene these past few weeks. He performed at Sweet's 11th anniversary show, he dropped in on a recent installment of comedy showcase Myrtle Comedy, and he was a guest on a recent installment of The Talk Show Series Presents: The Corrigan Show. He also dropped into Loose: A Comedy Show with Jo Firestone! at Housing Works Bookstore earlier this month. And these are just the appearances I can recall off the top of my head which is amazing considering I regularly forget what day of the week it is.

This past Monday (9/21), Cross hosted Night Train at Littlefield in place of usual host Wyatt Cenac. David Cross will again host Night Train at Littlefield this Monday (9/28), again in place of Wyatt Cenac, with Jo Firestone, Randy Liedtke, Aaron Glaser, KT Tatara, Donwill (DJ set) and more. That is sold out, but before that Cross has a headlining slot at Late Night Basement on Friday (9/25) at Livestream Public (195 Morgan Ave b/t Stagg St & Meadow St). Other items on the bill include a performance by Astronautalis, an interview/stand-up with Joe Berkowitz and comedian Josh Gondelman who collaborated on a book called "You Blew It: An Awkward Look at the Many Ways In Which You've Already Ruined Your Life" and an appearance by the great Jo Firestone. The show is free with 8:30 PM doors, 9 PM show. Oh, First 40 people to arrive receive will receive a free surprise gift: your choice of Josh Gondelman & Joe Berkowitz's upcoming book, "You Blew It!" or a nice cold can of Narragansett.

I am not sure if this barrage of live appearances is in preparation for a new stand-up special or what, but without a twitter account, an up-to-date facebook page, or an official website, keeping up with live Cross is pretty difficult. But he seems to be hitting all the usual comedy shows, so take a gamble and get out there.