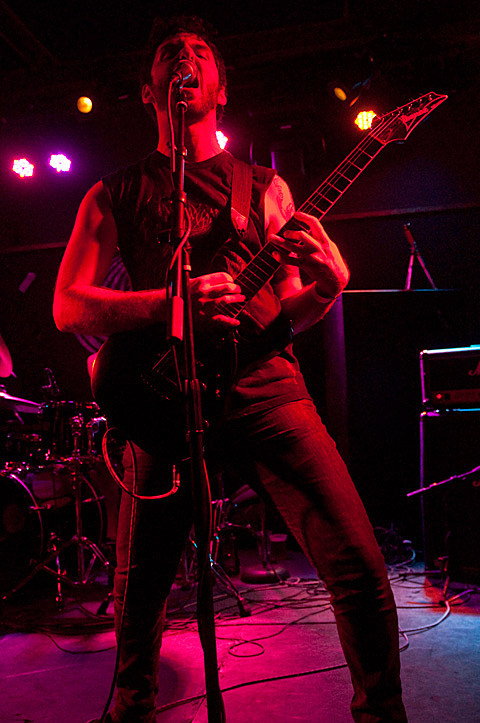 Woe will join We Are All Savages, Mutilation Rites, and Magrudergrind for a Brooklyn show at The Charleston at midnight on Friday night (2/18, or Saturday AM). The show, billed as the "Official Eyehategod Afterparty", features some overlap with the actual Eyehategod show (happening at Europa), as both Magrudergrind and Mutilation Rites are on-board to play both shows. Eyehategod will also be at SXSW this year, playing an official showcase at Scoot Inn on 3/19 with Pentagram, Naam, Cough, Ancient VVisdom, and Primitive Weapons.

Woe is currently working on new material, and will be sporting a fresh lineup at The Charleston following the departure of the Madden brothers. Woe posted this message:

"First and foremost, we are sad to say that Evan and Shane have left Woe. I think that not addressing it would be disrespectful but if they want this note removed, I will certainly do so. Nobody is going to go into detail about it so please respect everyone's privacy and don't ask. While I cannot and do not claim to speak for them, I have nothing but positive memories of the fantastic shows we played together to say nothing of the phenomenally-received recent album. They will continue with The Green Evening Requiem and recent Earache Records-signees Woods of Ypres (who were recently announced as a headliner for Heart of Winter Fest in Richmond, VA this coming February) so expect to hear a lot from them.

And we soldier on."

Meanwhile, Woods of Ypres are making their way to NYC as well, tagging Bowery Electric on March 16th with Gwynnbleidd. The band will reissue their fourth LP Woods IV: The Green Album via Earache on 3/22 and are preparing to release their final LP W5. More details on that are forthcoming, but for now checkout all tour dates and some video below.

Woods of Ypres - Allure of the Earth