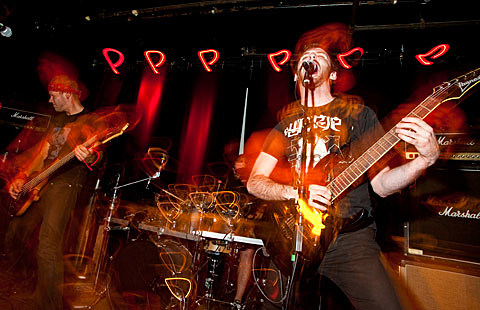 Woe will hit Saint Vitus on January 30th for a show with Abigail Williams, Immolith, and Vattnet Viskar. Tickets are on sale. The show, a make up date for the cancelled Dark Funeral tour, is one of TWO dates for the Philadelphia/NYC black metal crew, who will also bless Saint Vitus again with Immolith, as support for the latter's record release, along with Dominium, Mortum, and Salo on March 2nd (tickets are on sale).

Immolith are preparing to release their new LP StormDragon via Metalhit. Check out the new track "Hymns to the Countess" above/streaming below and look for the LP on (how appropo) Valentine's Day. Because nothing says I love you like bulldozing black metal.

All tour dates, and some streams of material by Immolith, Woe and Vattnet Viskar are below.

Immolith - Hymns to the Countess by brooklynvegan