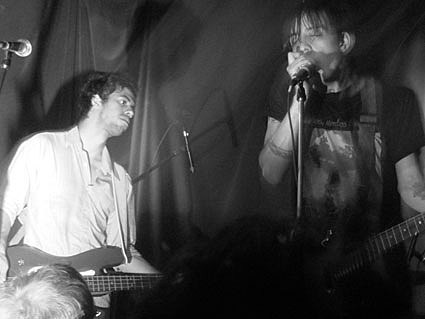 Montreal is an international city, a melting pot of various languages and cultures from all over to stake their claim of land and call it their own. This would help explain why on the fourth and final night of their Montreal residency at La Sala Rossa, Wolf Parade, the majority of whose members are transplants from the west coast of Canada, were greeted as hometown heroes by the audience, whose numbers as well are made up of people not originally from the area.

The band, arguably the second biggest in the city behind you know who, could have played one of the bigger venues downtown, but instead opted for the intimacy of La Sala Rossa which only holds 250 people. This made those fortunate enough to snag a ticket especially manic. It was a mob scene around the whole building.

I arrived midway through opening act Plants and Animals and immediately regretted not coming sooner. This Montreal power-trio build long cascades of folk rock, steadily building to post-rock, statically charged climaxes. They were receiving a headliner-like reaction and if the audience wasn't such a pro-Wolf Parade crowd, they could have threatened to steal the night....

Half of Wolf Parade's set list was made up of new songs presumably set for their next album - due out sometime next year. It's always a risky proposition when a band dedicates so much time to new material. The crowd can lose focus - some anxiously waiting for songs they do know, but that wasn't the case tonight. The attentive silence that greeted the first two songs of the set reminded me of people putting on a new album for the first time at home, and latching on to various melodies and vocals. The end of each new song wasn't greeted with an appreciative applause, but rather a genuine reaction. This wasn't lost on the band either. Near the end of the set, Dan said, "Thank you for being receptive."

And how are the new songs? Many of them have been floating around on various blogs and on youtube, so judge for yourself. With their myriad of side-projects, it's easy to get caught up in the name game of what came from whom. It would seem that their other musical outlets has allowed clear delineation about what goes where, as all the new songs were Wolf Parade through and through, unable to work within Sunset Rubdown's, Handsome Furs', or Johnny and the Moon's musical paradigms. The most well-received material went to "Language City" and "Fine Young Cannibals" (of which Boeckner said was a working title "until I can think of something better")

The highlight of the night was an especially intense version of "I'm a Runner" that became an impromptu sing-a-long, with the audience shouting out each verse in cacophonous chorus. Wolf Parade then seamlessly took all of the built up energy, and channeled it through "Fancy Claps." It was this ending that was all the talk with the insta-critcs convening outside the venue after the show.

For their encore, Wolf Parade came back and played a blistering "This Heart's On Fire" and then closed with "I'll Believe in Anything." All in all, a great night. If you have an opportunity to see them play soon, do so, as they are in rare form. I wasn't able to snag the set list, but from my notes (and the help of Trendwhore), here's what I came up with:

Encore:
This Heart's on Fire
I'll Believe in Anything