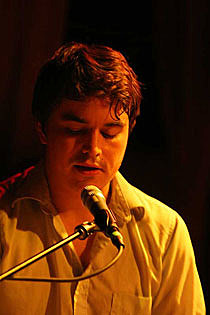 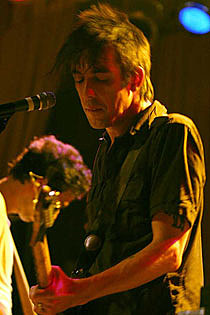 It felt like forever since I last saw Wolf Parade - it's possible it was. I'm glad though, because everything they played last night at Warsaw sounded so fresh. Actually, a lot of it was. They played a bunch of brand new material that gives me high hopes for their new album (which according to Dan's calculations should be done by now). We also heard all the hits, and everyone was going nuts - lots of energy in the room. I drank one too many Polish beers. Great show.

On Saturday (one day earlier), Wolf Parade played seven songs in a parking lot at 4pm (Dan said "am", but it was "pm") as part of the Download Festival in Boston (a festival that did not sell out). The setlist from that show names five of the new songs. Modest Mouse, Guster, Yeah Yeah Yeahs, and Apollo Sunshine also played the festival - so did Neko Case, Band of Horses and Bang Camaro.

The next Wolf Parade-related NYC shows are the Sunset Rubdown ones in October. Tickets are on sale. Wolf Parade are in Philly tonight. None of them - not even Handsome Furs - will be back for CMJ. More tour dates, below....