Wolfmother at MHOW in 2009 (more by Benjamin Lozovsky) 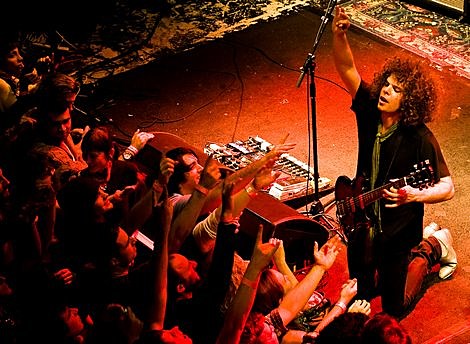 Well that was fast. Earlier this year, Wolfmother announced their breakup, and soon after, frontman Andrew Stockdale announced that he would be going on a solo tour in support of his new album, Keep Moving (out now), which would hit NYC on 8/6 at Bowery Ballroom and 8/7 at MHOW. But now the band have, um, "gotten back together" (though Andrew is still the only original member and it's actually the same lineup as the one on his solo album), and Andrew's solo tour, including both NYC dates, has been cancelled. Refunds for the NYC shows are available at point of purchase.

After canceling the tour, Wolfmother booked three California shows, the first of which took place at LA's Troubadour this past Monday (7/15). You can check out a video of the band playing "Woman" and the full setlist from that show, along with a list of all remaining tour dates, below.