Wolves in the Throne Room in Los Angeles, 2012 (more by Adam Murray) 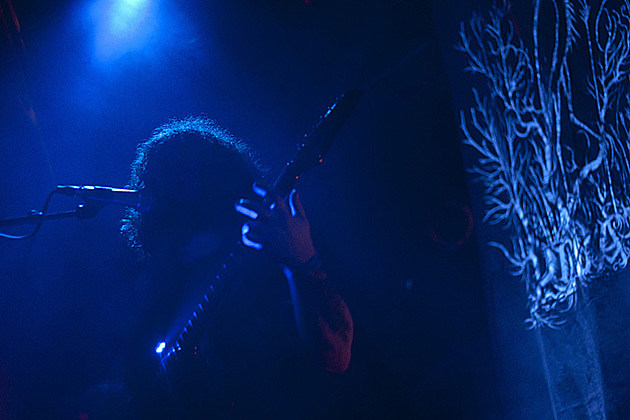 Olympia, Washington-located Cascadian black metal band Wolves in the Throne Room have scheduled a new release and revealed the running order for their next transmission, Celestite. July 8 is the date for the vocal/drum-less record, billed as a companion to 2011's Celestial Lineage. Indeed, as Wolves in the Throne Room teased in January, Celestite will explore the melodies and harmonies of previous material sans their distinctive wall of black metal. Per brothers and core members Aaron and Nathan Weaver:

There are no drums and no vocals. Rather, deep, heavy crystalline synthesizer journeying, Eno-inspired analog processing and arcane acoustic instrumentation expand upon dimensions folded within the universe of Celestial Lineage.

Started in 2002, Wolves in the Throne Room's rise to unexpected prominence can be traced to their 2005 Demo which beget their lauded 2006 LP debut, Diadem of 12 Stars. The relentless, Weakling-esque builds of hypnotic tremolo and atmospheric releases catapulted the group, and like-minded regional purveyors, to the forefront of USBM; something which hasn't always endeared them to metal's underground. If Celestite reaches LP lengths, it would be the outfit's fifth. Their last release -- for Southern Lord Records, their home since 2007 -- was a 2013 EP collecting two songs from a 2011 BBC session.

There we go: black metal is getting its Ambient 1: Music for Airports. (That airport? Constant delays, too many blizzards.) Check out track listing and the tour dates for Wolves in the Throne Room's July jaunt through the West Coast below. In addition, we'll toss in "Rainbow Illness," an instrumental cut from Celestial Lineage to get you prepped.

Wolves in the Throne Room - Celestite
1. Turning Ever Towards The Sun
2. Initiation at Neudeg Alm
3. Bridge of Leaves
4. Celestite Mirror
5. Sleeping Golden Storm