DTV (Direct to Video) packaging for the novel and the disc 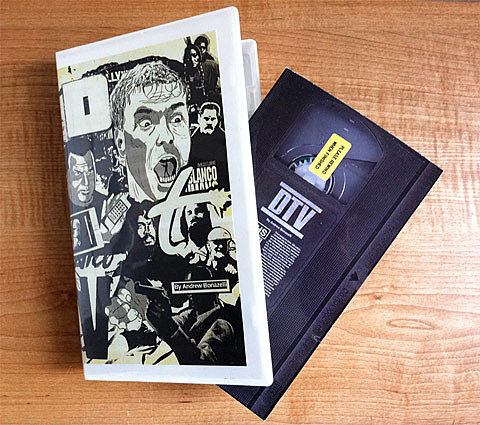 Soundtracks were all the rage in the 90s. Many of them left much to be desired, but a select few left an indelible mark on my young mind... namely records like the Judgement Night soundtrack ("Just Another Victim!"), Singles, and The Crow. So when I heard that bulldozing Motorhead-as-black-metal quartet Wolvhammer had taken on "Burn" by The Cure from The Crow soundtrack, I was more than intrigued. Stream "Burn" below; it's definitely an unexpected melodic turn from such a piledriving metallic workhorse.

"Burn" is going from one soundtrack to another. Wolvhammer's version is for the forthcoming soundtrack to he Andrew Bonazelli novel DTV (Direct to Video) which surfaces via Handshake Inc next week (3/30):

The book is a super-cool fusion of literary prowess and action-movie bravado, and though fully aware of the inherent, unintentional comedy found in the genre, Bonazelli has avoided the tongue-in-cheek route, instead crafting a story that celebrates the machismo, animal magnetism and culture of American action movies from the '80s and '90s. The novel itself is a brilliantly fun and poignant read, and could do for action movies what the nouvelle vague did for Hitchcock and Orson Welles.

Wolvhammer joins names like Total Fucking Destruction, The Atlas Moth, Cretin, Liberteer's Matthew Widener, The Austerity Program, members of Zombi, Early Graves and more to contribute everything from new tracks to "covers of music from such films as Robocop, Double Impact, The Running Man and Out for Justice". Sounds about as amazing as the packaging, which looks like a VHS tape (above).

Speaking of bad film and fun bands, Graf Orlock (who are also on DTV) ALSO have a new release in Los Angeles which comes with three different covers inspired by the film Heat.

There are 600 copies of this bastard, broken down into three different covers. The covers will have actual me-shot bullets holes in them, so technically, each is a 1/1 because even though i have ridiculously accurate and tight firing patterns, no two are the same. For you wieners trolling discogs, they are all black vinyl.

Order your "exclusive copy" at Vitriol.

DTV contributors Wolvhammer and The Atlas Moth will be in LA on March 31st to play a Scion label showcase along with Yob, Loss and Pallbearer. Entry is FREE with RSVP. Yob will be in NYC in May, as will Loss/Pallbearer.

Listen to both versions of "Burn" below...