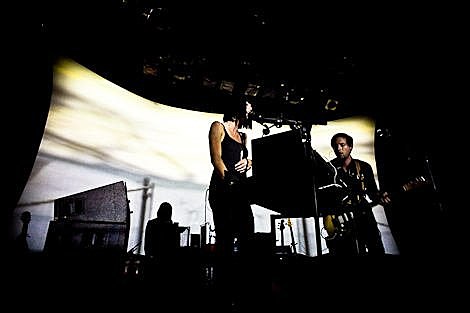 Andrew Kenny's band The Wooden Birds just got back from a tour with Great Lake Swimmers and will headline a close-to-home show at Maxwell's in Hoboken tonight (11/3). The soothing sounds of Peasant will open the show. Tickets are $10.00. Check out a recent video interview with the band below.

The Wooden Birds released their debut album on Barsuk Records earlier this year. Barsuk also recently put out the debut by Ramona Falls who just released a new video for the song "I Say Fever". You can watch that below.

Barsuk has two new releases scheduled for February 2010. Rocky Votolato's new album True Devotion will be out on February 23rd. "Sparklers" is one of the songs on that will be on that album. You can download a live version above. Rocky kicks off a tour in a couple of days, but not just any tour. He'll be playing in people's living rooms up and down the east coast. There's a NYC show in midtown Manhattan on November 6th. Tickets are on sale. All dates below.

The other album Barsuk is releasing in February will be by Phantogram who just got done playing a few shows during CMJ including one at Music Hall of Williamsburg with The xx and School of Seven Bells. The album "Eyelid Movies" will be released on February 9th. Download the song "When I'm Small" from that album for free above. Phantogram is now on a tour of Europe, but will be back soon. They play a free show at Brooklyn Bowl on December 19th. All dates below...