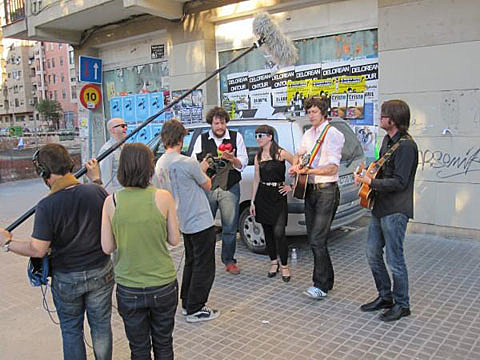 The Wooden Birds, fronted by Andrew Kenny of American Analog Set, will be hitting the road this August for shows with Arts & Crafts songwriter Dan Mangan. Mangan's signing to the BSS label was announced in May....

"The Vancouver-based songwriter released his acclaimed sophomore LP, Nice, Nice, Very Nice in Canada last year, quickly snapping up national awards including the XM Radio Verge "Artist of the Year", CBC Bucky Awards for "Best Vocals" & "Best Song" and simultaneously triggering a tidal wave of accolades, landing the ridiculously likeable musician on the covers of publications coast to coast. Now, with an eye towards building on that momentum, Mangan has signed a deal with Arts & Crafts in order to bring Nice, Nice, Very Nice to the U.S. on August 10."

The MP3's above are songs from Wooden Birds' debut, Magnolia, which came out last year on Barsuk Records. In February the group released the Montague Street EP for free online through Insound.

Before the birth of the Wooden Birds, Andrew worked in his Brooklyn Heights home studio on Montague street to find the songs and the sounds that would define his new project. The four songs available now as Montague Street EP were borrowed from those sessions and share the sound of a band about to happen.

Videos of both and all tour dates are below...