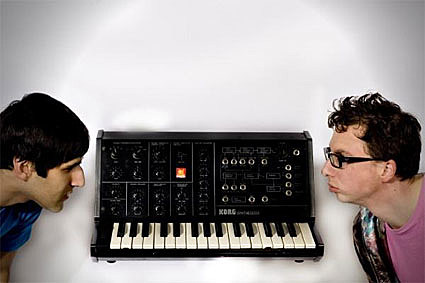 Woodhands are a keytar and drums electro-pop duo that have been making waves in Canada and are poised to take their act stateside. After a series of introductory shows south of the border (including SXSW) Paper Bag Records have announced that their debut record Heart Attack will be available this fall. Their quirky, frantic sound falls firmly in the space established by label-mates Tokyo Police Club and You Say Party! We Say Die!.

Arrive early at the free show at Studio B tomorrow (June 19th). Woodhands are playing with fellow Toronto natives Crystal Castles and there will be DJ sets by Frankie Chan and Radioclit. Live video and other tour dates below...