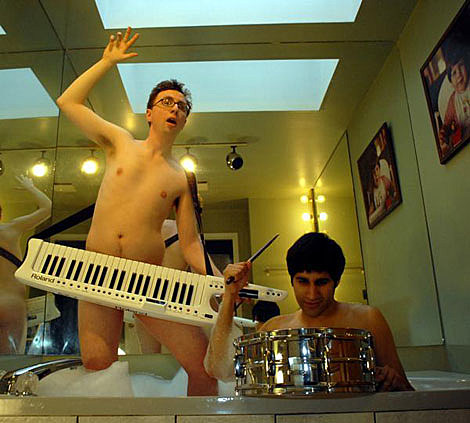 Toronto dance-rock duo Woodhands are back in NYC this week for the first time since playing last summer with Crystal Castles at Studio B. I caught them when I attended M for Montreal back in November and they were really fun live, putting on a sweaty, two-man disco party. Singer Dan Werb rocks a keytar as unironically as one can, and drummer Paul Banwatt is a human drum machine. They also, when I saw them, brought their own laser light show which I certainly hope comes with them this week when they play Death By Audio on Thursday (2/12) and The Studio at Webster Hall on Friday (1/13). For some reason I find the idea of lasers at Death By Audio hilarious and awesome. Hopefully they'll also do their cover of Eddie Grant's '80s classic "Electric Avenue" which you can download above. 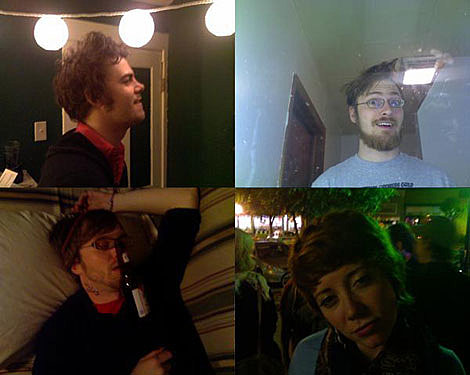 This week is not as action-packed as last, but there are some other notable shows happening. Lawrence, Kansas' Rooftop Vigilantes highlight a very solid bill at Cake Shop on Thursday night (2/12). Their label describes them as "a very drunk Fugazi" which kind of works but they are poppier than that and actually remind me of semi-obscure San Francisco band Oranger. (Comparisons to The Replacements aren't unwarranted either.) Loose and wild, but with solid pop songs holding them up, their debut Carrot Atlas blazes through 16 songs in under half an hour and you can tell by the recordings that they'll be a lot of fun live. (Lawrence.com has a bunch of MP3s to download and an interview with the band.) Rooftop Vigilantes also play 92YTribeca on Friday (2/13) with Endless Boogie and Mike Bones. More Rooftop Vigilantes dates at the end of this post.

Also on that Cake Shop bill: caUSE co-MOTION, who just played with The Pains of Being Pure at Heart this past Saturday; Right on Dynamite who I've written about before; Beachniks which sometimes includes JB of Crystal Stilts but they are on a European tour as we speak so I don't think he'll be there; and Mr. Falcon who I know absolutely nothing about but the two songs on their MySpace are both really good.

And finally, tonight (2/10), Patrick Bower and Joe & the Flying Spoons are playing a free show at Zebulon. Bower's band has grown to include Doug from Dirty on Purpose and Steven Mertens of Spacecamp; meanwhile, Joe of Flying Spoons was in Dirty on Purpose and also features Chris of Spacecamp (and Patrick Bower's other band, World Without Magic). It's more than a little incestuous in the Williamsburg music scene. Both bands are vaguely country-ish, with Bowery leaning more towards lush, beardy folk, and the Flying Spoons more upbeat and feature a chorus of lovely ladies. Worth checking out.

Tour dates and videos after the jump...

Woodhands - I Wasn't Made for Fighting