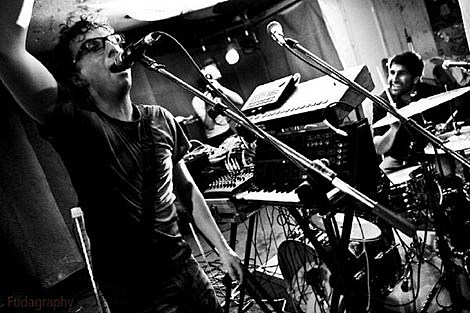 Toronto electro-duo Woodhands are on a US tour in the wake of their recent Paper Bag Records Dancer EP. After the success of their cover for Eddy Grant's one-hit wonder "Electric Avenue" (ABOVE) (blessed by Eddy himself), the keytar-n-drums unit of Daniel Werb and Paul Banwatt have decided to tackle Katy Perry's hit single "I Kissed a Girl" (ABOVE). According to Werb, "we did it because the spirit of the song spoke to us: It's that feeling of being overwhelmed by the moment, of indulgence, of unfettered hedonism. Also, Katy Perry is hella hot. And the song is dope." [Paperbag Recs]

The band closes its tour in NYC on Saturday, May 16th at the Delancey. The show is part of the venue's monthly Loose Nukes party. Savoir Adore and Deleted Scenes are also playing. In addition to the Dancer EP, Woodhands also released an iTunes-exclusive live EP earlier this year.

"They are also one of the featured bands on $99 Music Videos, with a new unreleased song. If you're not familiar with the series, we dared Savoir Adore and director Matthew Semel to create a music video for $99 or less. The result is in 2-parts: an awesome music video and a behind-the-scenes episode where you can check out footage that follows the band and the director during the music video shoot."

Watch both of those videos below.

If you want to see "I Kissed a Girl" done by its originator (do you?), Katy Perry is touring the world this summer. That includes a Tuesday, July 28th show at NYC's Hammerstein Ballroom. Tickets are on Citi/Live Nation presale now. General sale starts Saturday, May 16th at 10am.

A CFCF remix of Woodhands' "Dancer," with live videos of the band from 2009 (including at SXSW) and an interview, and all other videos and tour dates below...

Katy Perry on American Idol - Waking up in Vegas