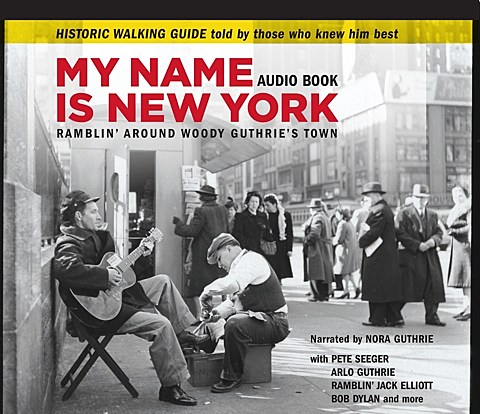 The late, great folk singer Woody Guthrie called NYC home for 27 years, and that portion of his life will be celebrated with a new three-disc album, My Name Is New York, on September 23. According to a press release:

Featuring new interviews with luminaries like Pete Seeger (in one of his final interviews), Woody's son Arlo Guthrie, and Ramblin' Jack Elliott, as well as with Woody's many other friends and family, the first two discs take listeners on a virtual tour of the city as Woody experienced it through visits to 19 locations. They include the boarding house on 43rd Street where "This Land Is Your Land" was written; the Greenwich Village apartment that The Almanac Singers -- an all-star folk collective included Guthrie, Seeger, Lead Belly and Josh White - called home; and his home on Coney Island, where Woody tirelessly composed over 100 songs, and was eventually laid to rest.

The collection also includes a bonus music disc featuring an array of Guthrie's NYC songs, including the first recording of "This Land Is Your Land"; two previously unreleased home demos he recorded in the city, including the song that gave the set its name and a duet with Sonny Terry; and five premieres of previously unpublished lyrics from a variety of artists, from contemporaries to younger musicians following in his tradition.

You can stream one of the tracks (via Rolling Stone) with the tracklist, below...