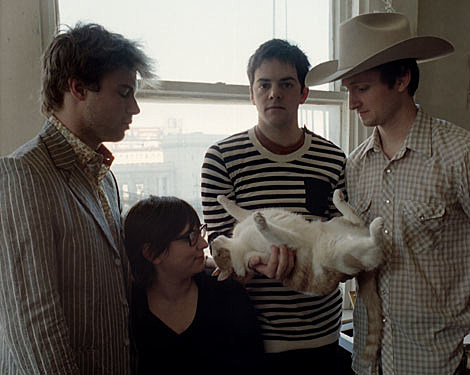 That's followed by Do Make Say Think and Charles Spearin's "The Happiness Project" on September 10th (the same lineup that will tour together in November), Tim Hecker, Grouper and Julianna Barwick on September 11th (Grouper is also playing ATP NY), and the final night with Dan Bejar (Destroyer), Loscil and JACK Quartet on Saturday, September 12th. Tickets are still on sale for all events.

We also have two pairs of tickets to give away to each show. Full details are below.

Do Make Say Think's new album, Other Truths, will be released on October 20th via Constellation Records.

is made up of fellow Vermont-to-New York transplants Nico Muhly, Thomas Bartlett (aka Doveman), and Sam Amidon. The three have appeared in each other's shows, played on each other's records, and now they are heading on tour, alongside collaborators Oren Bloedow and Nadia Sirota. The performances will feature music from each of them, as well as some sneak previews of future collaborative schemes. Amidon will perform a set of folk ballads, accompanied by Bartlett and Muhly. The microphone will then be passed to Bartlett. Finally, the group will perform a selection of Muhly's compositions with violist Nadia, culminating in The Only Tune, a piece that Muhly wrote for Amidon, and that he, Amidon, Bartlett, and Nadia premiered last year at Carnegie Hall.

TO WIN A PAIR OF TICKETS TO EACH WORDLESS MUSIC @ MILLER THEATRE show (9/9-9/12): E-mail BVCONTESTS@HOTMAIL.COM. Put the name of the show you want in the subject (an example subject would be "802 Tour" or "Destroyer" or "Grouper" or "Do Make Say Think". Include your first and last name. Winners will be chosen at random and contacted with details.